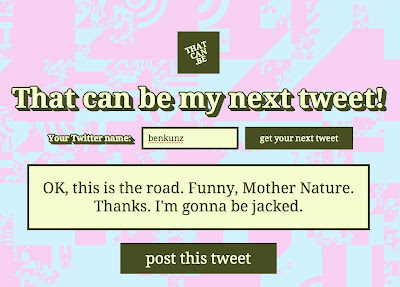 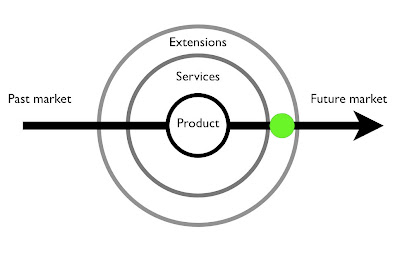 Evolving a business is difficult because it seemingly requires you to take your eye off what drove profits in the past to find what will bring strong margins tomorrow. But look ahead you must; after all, the business world is littered with cautionary tales of those who did not: IBM’s hardware obsession in the 1970s led it to miss the PC operating system opportunity; Kodak pushing film as digital cameras killed the photo developing industry; Microsoft wasting away first-mover advantage in tablets for nearly a decade to be beat by Apple’s iPad core.

So kudos to Amazon for making a brilliant evolutionary chess move. On Tuesday, Amazon launched a service giving away movie streaming to members who subscribe to its $79-a-year “Prime” premium shipping service. Amazon Prime was already one of the smartest moves in ecommerce, building loyalty among shoppers while charging them more for “free” 2-day shipping. (It’s “free” shipping, you see, if you spend $79 a year for access to it. And once you spend $79 a year, well you better buy a lot of books, spending more of your money to get more of that great “free” shipping.) Amazon Prime is a sticky pricing gambit that makes consumers feel good while sending dollars straight to Amazon’s bottom line.

Now, Amazon has made the shipping deal seem even sweeter by adding “free” access to 5,700 films and TV shows, giving Netflix a competitive whack at the same time. It’s an arrow shot straight at the future of digital content, while tying consumers to Amazon’s current core product, hard goods shipped by mail. All we can say is Amazon, your strategy is Prime. 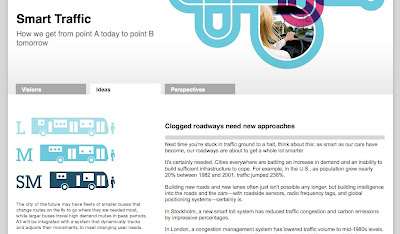 How times have changed. Back in 1997 when IBM wanted to convince global businesses that newfangled IT systems could help them, it spent $40 million with Ogilvy & Mather on TV spots, radio, and some banner ads.

Today IBM is shaping opinions of itself with the new site IBM.com/think, which combines 90% rub-your-chin content in the style of The Economist or Harper’s with about 10% self-promotion. IBM steers clear of politics and instead pushes science-report-toned entries on food, cloud computing, energy and the environment. The site is fed with banners around the web and dovetails with social media outreach on blogs, Tumblr, LinkedIn, and Twitter (nicely run by real IBM humans @adamclyde, @jhodge88, @junkstar and others).

Using quasi-editorial copy for corporate messaging is nothing new; Mobil broke the ground on this with its quarter-page, black-and-white NYT Op-Ed ads in the 1980s. But this feels different both in non-salesmanship of copy and in nuanced outreach. Tech blogger Robert Scoble calls this communication strategy a “starfish approach,” where various arms reach far into the web to give your audience multiple ways to receive and engage with your message. Perhaps the growing transparency of social networks, coupled with consumer skittishness of being sold ideas by corporations, is requiring large companies to provide more-objective value in their content. A decade ago IBM was a distant monolith. Now we can ping IBMers by their personal Twitter handles. That makes us think.

Occasionally you read an insight so bright it hurts because you hadn’t seen it first yourself. That’s how we felt today reading Bill Green’s riff that the Super Bowl ads all failed because not one was as good as “1984” — the Apple TV spot that introduced the world to the Macintosh computer.

That spot was perfect. It was directed by Ridley Scott, fresh off of Blade Runner, and so shook the world when it aired in the third quarter 25 years ago that it was replayed on the evening news. “Can you believe what Apple did? It called IBM Big Brother!”

So here we are, now in that big-screen future, and we get spots about racing cars and aliens pushing TV and guys crunching chips so loudly that girls’ clothes fly off. Bill lists nine total reasons why all these ads pale next to “1984,” and his last is most plaintive: Context. “You relate to an ad based on how your life is going,” Bill says, and if ever there were an opportunity to play savior against a dystopian disastrous environment, this is it. The global economy is melting, ice caps are soon to follow, the aging population is stressing social services, intellectual property rights are being tossed, bailouts may bankrupt our grandchildren, and that’s just the news on page A1.

Maybe that’s why the latest Super Bowl ads fell flat. On the 25th anniversary of “1984,” advertisers missed a golden opportunity to offer a hopeful solution. Maybe Obama took the wind from their sails (the brand position for hope is filled). Maybe, at heart, creatives knew no current product is as inspiring as the original Mac (although we do dig that Audi). Still. Ad industry, it would have been nice if you had tried. 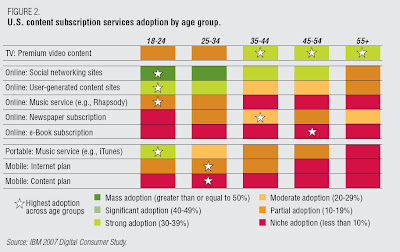 A new IBM study provides an outlook on how the ad industry will change dramatically in the next decade. IBM interviewed 2,600 consumers and 80 ad executives, and the result is a straightforward trend: Money will shift away from traditional TV, radio, and print, toward internet, mobile, and social media.

But the real news in the report is that intermediaries — web designers, ad agencies, media planners, and all the other ad distributors — are at risk. IBM predicts that the ability to manage ad inventory (get it out there) and the ability to create ads (YouTube video-style) will erode the business models of the entire ad industry.

Here’s the scenario. Imagine you’re a marketing executive in 2010 planning a TV campaign and so call around for help:

Jim, at Ad Agency 1, responds: Sure, we can do that. We’ll produce a TV spot for $300,000 and run it on a cable network that most people record with DVR boxes so they can skip your commercial.

Jane, at Ad Agency 2, says: Sure, we can do that. We’ll produce it for free with video from YouTube and run it on an internet network where everyone will watch it, then forward it to 2 million of their friends.

No brainer, eh? IBM notes the future is here. 25% of Americans now use DVR boxes, and 7% have created and uploaded video online. Compare those data points with the current cost for producing a professional TV spot — $100,000 to $350,000 — and you’ll see why many ad agencies may be threatened. Nearly half of ad executives interviewed said they believed at least 10% of media funds would shift from TV to interactive in the next five years.

The study points to a simple solution, and it comes down to data. The fragmenting forces of consumer control, consumers blocking ads, and 360 degrees of millions of media channels mean it WILL get harder to make advertising work. Long gone are the days when you could buy a few broadcast networks and reach all of America. The ad agencies and media planners who can track hard results to see what works will be able to give CMOs what they want — proof.

Think of the irony. The future of creative lies in data.