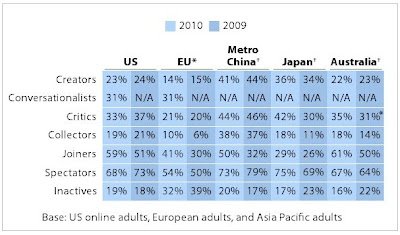 Only 23% of U.S. participants on social networks describe themselves as “creators” of content, according to a new global study by Forrester Research. Less than a third engage in conversation, and more than two-thirds watch passively. GigaOM notes this should be no surprise, since another recent study by Harvard found that “90% of the content on Twitter is created by 10% of the users.”

The implication is that as social media goes mainstream (Facebook is now the No. 3 website among U.S. adults age 45-54), more users are spending more time watching and less submitting. This may be good news for advertisers who seek to use social channels as a push medium for their message, and not-so-good news for those who believe everyone wants to actively engage in a two-way conversation with their brand.

Who owns your social graph? According to Super Bowl fans, anyone can. According to Forrester Research, only your employer — or at least your boss owns a big chunk of your personal human network.

We’ll start with football. On Sunday ad shop Mullen and social-tracking service Radian6 captured up to 0.7% of all tweets with their clever BrandBowl 2010 advertising portal. The site, if you missed it, used Radian6 monitoring to rate chatter about Super Bowl ads. But beyond buzz, BrandBowl also illustrated an agency and software firm co-opting the Super Bowl social experience.

What did Mullen and R6 really do? They didn’t take over the sports brand. And this wasn’t about content. They borrowed someone else’s audience. And if you think about it, far more than a brand or product, an audience is the most valuable thing anyone can create, because only your customers are a source of inflowing value.

Social networking has destabilized customer bases because now anyone can find a way to pull an audience to their own hub. In the past, the only way to watch a national football game was to dial in to the correct TV channel; today, Twitter, Facebook, YouTube, Vimeo, LiveFyre, and soon Google Social Gmail create fluid hubs that carry conversations elsewhere. A smart marketer has an opportunity to build an axis that spins another brand’s existing audience. Or, in financial parlance, it is now possible to steal someone else’s customer stock portfolio.

Many businesses with customer equity, such as Forrester, aren’t keen about this. When the superbly talented Jeremiah Owyang left Forrester last year to move on to a consulting role, Forrester asked his replacement, Augie Ray, to shut down his prior marketing blog and only post comments related to marketing on the official Forrester sites. It’s hard to peek behind Forrester’s curtain but outside data shows traffic to its main web site down about 50% from summer 2009, so we understand why Forrester is building a wall. Augie appears happy to do so and has defended Forrester’s policy as a basic intellectual property agreement.

According to 20th century business logic, Forrester is absolutely right. IP produced by employees, or even the client roster an employee builds while working there, should belong to Forrester. But the real question of Forrester’s wall is not who owns content or IP, but who controls an audience. Augie’s past blog, according to Quantcast, reached about 1,200-2,400 users per month — not a large crowd, but likely highly influential in the marketing industry. The real risk for Forrester is Augie becomes the next go-to social media star like Jeremiah and then leaves, taking his fans with him.

So who is right? If the issue is not your product (services, methodology, thoughts, blog writing) and really your audience network, should a brand be able to own that as well? What if the audience is following your persona as the center more than the illusory corporate brand?

It’s a serious issue because as networking technology improves, you, dear individual, will become the center of everything. Another Forrester ex-strategist, Charlene Li, has proposed social media will soon “become like air“. Imagine Facebook in the year 2030 when a chip in your ear and webcam on your wrist allow you to post videos of your every thought to everyone in the world, and social media approaches telepathy.

Who owns your mind and its human connections then? And can you take your own brain with you when you change jobs?

It’s been said open systems flourish and closed systems stagnate. Social media systems, on the other hand, simply rewrite the rules of business. 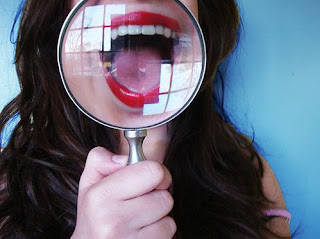 I am disappointed that Forrester would condone paid posts as a legitimate marketing model. Bloggers lose out as they erode their *authenticity* and brands lose consumers’ *trust* — two important aspects that make this type of program a failure.

Paying someone to blog about a product is a disturbing low point in human ethics, because it manipulates a system to artificially elevate a topic where it does not belong, inside human opinions. It is damaging because the readers cannot judge where the message is coming from, or whether it is true or false.

Sean, let’s imagine Gartner gives you a $500 gift card if only you say in your next upper management meeting, “Hey guys, speaking of our research, have you seen what Gartner is doing lately?” You might be free to voice your own opinion, and say with transparency that the mention was paid, but you are still inserting a brand into a conversation where it has no bearing. People in the meeting would wonder if your opinion were real. Your authenticity would be eroded and Gartner would look a bit the fool. Do this enough and no one will listen to you in meetings.

And that’s the real point. These gimmicks will eventually erode the value of bloggers’ individual voices and the brands they shill.

I’m certain this trend will continue, crest, and then fade as the pollution among real social media conversations creates the inevitable backlash. See telemarketing and email spam for two recent examples of other networks where overly aggressive intrusions failed due to consumer discontent.

As for the bloggers who consider it: If you don’t see the ethical problem of selling your own opinion, then perhaps you don’t place much value on your own voice. Keep it up, and your readers will agree.

(Reprinted from our comments on Forrester’s blog.) 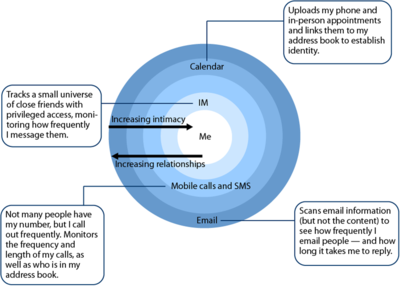 If you have trouble keeping up with Twitter and Facebook and MySpace and LinkedIn and your Industry Group, you’re not alone. Charlene Li at Forrester notes today’s social media really amount to madness — where every forum sets up concrete walls around your network. This is crazy. Imagine if to get onto the Web, you had to use different browsers and operating systems to see NYTimes.com vs. CNN.com vs. Slate.com, because each ran on different web networks.

Eventually, you, not a web service, will be the center of your social contacts. After all, shouldn’t you have fluid access to your own relationships? Charlene writes:

In the context, the idea of social graphs being “owned” by different social networks makes no sense. Yet, all of today’s social networks build their business model and competitive advantage on having the largest, most complete social graph. The result: I have a close colleague who enjoys exploring all of the new social networks and “friends” me on all of them, figuring I’m a pretty good person to have in his new network. In a world with a single social graph, he would be able to import his existing personal, social graph into any new service, and immediately begin enjoying the new service without having to wait for his friends to catch up. And I would be spared the insanity of having to accept his umpteenth “friend” invitation!

Well said. Or put another way, Facebook and competitors may soon be forced to merge into one common, open operating system — so you can control your own network. Today if you build up a vast network of peers, say, on Facebook, and then decide to start a new social system such as LinkedIn, you have to spend weeks trying to rebuild the same “social graph” of people. Uber-blogger Robert Scoble got in trouble with Facebook when he ran a script simply trying to export his list of contacts, so he could use them elsewhere. Facebook shut him down for a day before backing off.

When people realize they own their own relationships, they may demand more control. And even if consumers don’t demand this, surely some clever marketer will see the unmet opportunity — and like Netscape, create a portal into a new world.