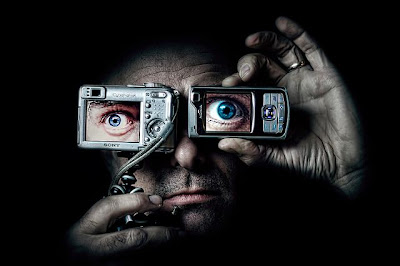 If you peel back the judgmental layers of the recent SXSW Homeless Hotspots controversy — that it was meant to help the homeless, no it was a PR stunt, no it was a PR stunt that backfired, no it was a meta-PR stunt designed to backfire to create massive conversations that built even more PR — the deepest layer is why everyone got upset: We all fear technology. No one gave a damn when homeless people in Austin made a little money selling newspapers, but when BBH Labs had them hand out wireless connectivity, suddenly it was “degrading,” “dehumanizing,” “exploitation.” Really? If the transfer of product, value and information was the same, but only the conduit changed from ink to ether, then why is information transmitted on crushed wood pulp a better use of human value than data sent via airwaves? The user next to the homeless man or woman could receive the same story from the service, first on paper, second on a tablet. So who cares?

The answer to me is simple: Deep inside we are afraid of where technology is leading us, how it is disengaging humans from the real world, and this Hotspot effort which at superficial glance apparently merged poor people into technological antennae was thus a Frankenstein creation, an eerie look into the uncanny valley of morphed human gears, and that is distasteful.

People freaked out unfairly because human-technology singularity is damn freaky, and BBH unwittingly woke us up to that merger.

This reaction was completely illogical. But in my view, this was the greatest lesson from BBH Labs’ brave and noble experiment. We didn’t learn how to help the homeless, but we sure saw how scared we get when technology becomes part of our human souls.

From my comment at What Would The Internet Do? More information on Homeless Hotspots is here. 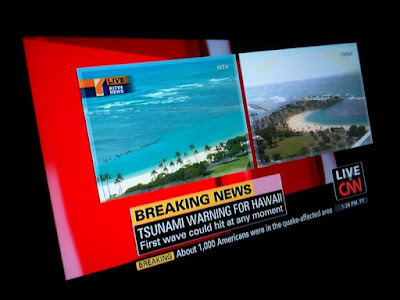 We wrote this about a year ago. Today, watching a tsunami bear down on Hawaii, it still fits:

We came across a debate on Twitter recently where Amanda Chapel, the faux persona charged with poking fun at social media thought leaders, referred to Søren Kierkegaard’s existential theories that people hide the meaninglessness of life by drowning themselves in diversions. (In case you miss the Amanda Chapel arguments, she’s a mask, she’s brilliant, she’s caustic, and she thinks the social media craze is overblown — which is right, of course.) So we read up on Existentialism and came to the concept of dread.

Newscasters love dread; the weather forecasts are filled with it. In the days before Hurricane Ike slammed Texas, CNN, Fox News and the other broadcast outlets were salivating at the thought that cities could be decimated, Galveston drowned, ships sunk at sea. “CERTAIN DEATH!” cried the headline at CNN.com.

Fresh on the heels of Wrangler ads using death to scare you to attention, John McCain today rolls out a new TV spot scaring the be-taxes out of Americans. Seems Obama is a recipe for disaster, cooking up new ways to snatch the bread off your kitchen table.

The logic is debatable. Obama would raise the highest income tax bracket in the U.S. from 35% to 39.6%, putting a 4.6% ding on affluent individuals. Conservatives suggest this would inadvertently slam 34 million small business owners, who often pay the highest tax rate on business income filtered through S corporations or farm proprietorships, and thus depress the economy. Liberals respond noting the last Democrat in office didn’t really kill the economy.

No matter. What counts here is that fear is effective, scaring people silly sells, and if you can plant a seed in someone’s mind that Product A is tied to Horror B, that doubt creates a natural aversion. People buy things, or vote for politicians, often on emotional whims. As we near the final mile of U.S. elections, expect more claims of catastrophe — global warming? war mongering? nuclear winter? — to be thrown by both sides.

This is the scariest video we’ve ever seen — not from gore, but tension. What would you do? Apparently the trauma nearly destroyed Nicholas White’s life.

It’s a little case study in what happens to businesses when their processes break down, and they no longer listen. Do you have any customers out there, shouting, trapped in locked elevators? New Yorker story here.

Reading the NYT review for the brutal movie Funny Games we began to wonder, what is it about fear that people find so interesting? Or, if you found another short film about torturing chocolate candy, would you watch?

Psychologists say fear is essential for survival — it sparks the flight or fight increase in pulse and muscle tension that helped our ancestors run fast from tigers. A debate over fear was what caused a rift between Sigmund Freud and Carl Jung (although some say it was because Freud was sleeping with Jung’s wife, a bummer in any friendship). Freud thought libido was the prime motivator of humanity, and sexual urges drove our behavior; Jung thought deeper archetypes — call it pieces of our unconscious — were at work. Jung’s archetypes explain why people who live in cities who have never seen a reptile still have a deep-rooted fear of snakes. And a big motivator for Jung was fear of death.

Fear is often used in advertising, not necessarily as the main tool in attracting attention, but more for selling the message. A classic example is the 1987 This is Your Brain on Drugs campaign. Economist John Kenneth Galbriath famously pointed out that advertising makes people buy things they often don’t need, because we fear not having enough. In The Affluent Society,

He depicted a consumer culture gone wild, rich in goods but poor in the social services that make for community. He argued that America had become so obsessed with overproducing consumer goods that it had increased the perils of both inflation and recession by creating an artificial demand for frivolous or useless products, by encouraging overextension of consumer credit and by emphasizing the private sector at the expense of the public sector.

Consumerism equals fear — worry that you don’t have enough gadgets or clothes or food or supplies or pelts, also wanted by your ancestors, too, as they fought to stave off the ultimate end. If their cave didn’t have enough nuts, they’d die in winter. The impulse of fear somehow stimulates us; roller-coasters and mall sprawl are the logical result.

All of which explains why we find the above anti-rabbit film by Dutch filmmakers Lernert Engelberts and Sander Plug fascinating. Something is at work, deep, and Easter will never be the same. Tx Andy for the sweet dream.