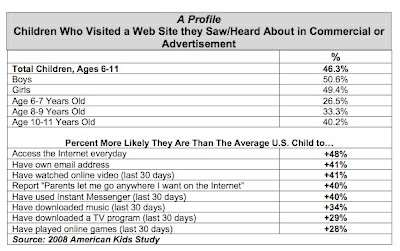 If you have children you know they are drawn to anything web related. We can hardly get our iPhone away from the wee ones. So it’s no surprise that MRI reports children 6-11 leap to the internet to research products they see in offline ads. About 46% of kids report they visited a web site they first heard about in a commercial. Within those numbers, the skew tends to older kids 10-11 who have more access to the net and sophistication.

The implication goes beyond children for marketers who often segment media plans and examine inquiries from each channel — TV vs. radio vs. print vs. web banners vs. SEM — as if they were separate Olympians competing for a gold medal in Greece. That’s a mistake, since one media channel may feed another. Broadcast and print still work to build awareness, and then the web captures the curious as they explore for more information. Integrating your measurement to capture the impact of all media touchpoints won’t be easy, but until you do, don’t turn off the TV. 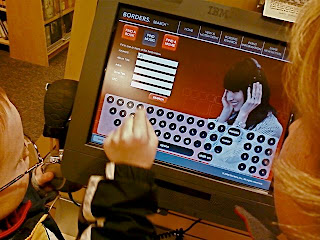 Anastasia Goodstein writes a thoughtful, provoking column in BusinessWeek calling for new rules on the digital media now reaching children. We read it after returning from a trip to Borders with our kids … where they had leapt at every digital screen, dialed numbers from our cell phone, and upon returning home jumped onto the internet.

Watching our boys click around the Matrix, we realized: It’s too late. The digital genie is out of the bottle. Today’s media world simply cannot go back to the 1990 Children’s Television Act, or create a new digital equivalent of web site rules and regulations, because media has left the building. You see, children are now creating their own content universe.

The Pew Internet project recently noted that 64% of online teenagers ages 12-17 do some form of content creation online. More than one-third of all teen girls blog, and about 1 in 5 teen boys have posted a video online where someone else can find it. The fragmentation of the media has changed into a chorus of creation, and the use of these creation tools is trending into younger and younger demos. What are 10-year-olds texting each other? We don’t know, but you better believe the pre-teen and teen content, photos and video probably wouldn’t pass the S&P guidelines for prime-time television.

We applaud Goodstein’s ideals, and certainly any parent might find media trends disturbing. Back in 1983, the pool of advertising targeting tots was estimated at $100 million; today, marketers spend more than $15 billion annually on children’s pitches. Goodstein notes studies have shown children under age 8 can’t differentiate truth from fiction in a TV spot, a report confirmed when our 7-year-old told us one night, “Daddy, do you know there is a butterfly that helps people sleep?” (See: Lunesta.)

The best idea Goodstein has — one that we truly like — is for industry and media to adopt standard labels for what’s in the digital content (is it rated R?) and to note when the content is sponsored (did an advertiser pay for this web game?). This would empower parents to filter content arriving over digital nets. But even that is becoming impossible in this new world of media creation.

A friend asked us recently what we thought the world would be like in 30 years, when his daughter grows into an adult. We thought: The internet is everywhere. Everything is plugged in. Information is free. Every device has a nimbus of information. We know the location of everything. And one-to-one personalization and one-to-many networking reach the ultimate nirvana, where any individual can share with the world and the world can target that individual back.