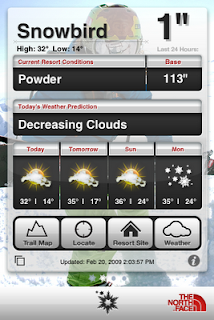 See the red logo above? Notice how small it is?

Dirk Singer, chief of the London-based Cow PR shop, has a nice review of the North Face iPhone app, which gives skiers free information on snow conditions. “Though it contains a link to the nearest store, North Face knows better than to interrupt users’ ski holidays with constant brand info,” Dirk writes.

This reminds us of the recent Bud.tv failure, which by comparison pushed the brand hard and made it difficult for users of the entertainment site to derive any content (Bud.tv had an extensive registration/log-in process that required your driver’s license). Unlike North Face, Bud.tv failed because it didn’t offer enough free value first before trying to identify (or sell) you, the user.

Wired editor Chris Anderson has been making rounds talking up his new book Free, filled with the concept that the rapidly diminished costs of data transfer and storage mean prices for many services are also approaching zero. In this competitive arena, marketers need to provide some level of service for “free” … while in reality they hope to make money by selling goods to a fraction of the users. As Chris has noted, even if you sell to only 1% of your audience, if your audience is big enough, 1% of a large number can still be a large number. North Face has gotten the free-vs.-selling balance right. Next time we head north to ski, we’ll check out their iPhone app … and then maybe buy some gear along the way. 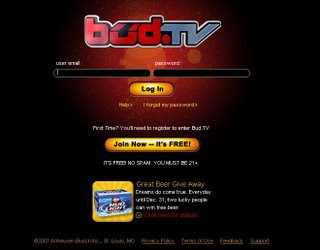 Ad pundits seem pleased that Bud.tv has kicked the can. The site drew heavy criticism when it launched, and Adweek editor Brian Morrissey has perhaps the best analysis of how Bud.tv failed by trying to be a content portal in a world of disseminated internet entertainment.

We wrote a year ago that one major problem was the lead form, or more accurately the sign-up process. Bud.tv asked visitors to create accounts with a complex age-verification system that included your driver’s license number. The site launched with a $30 million Super Bowl blitz and content by Kevin Spacey’s Triggerstreet and Matt Damon’s LivePlanet, but instead of reaching the goal of 2 million users per month, traffic hovered around 150,000 uniques, then slid. Anheuser-Busch tried to fix the site with help from guerrilla New Media Strategies. Bud.tv eventually was redesigned to give away some content previews. Alas, fail. At last check Alexa gave Bud.tv a traffic ranking of 1,296,883 among all web sites; by comparison, this niche blog’s ranking is 958,442.

There is an important lesson — web sites who hope to build audiences or sales need to give away something of value before asking too much of users in return. Anheuser-Busch was in a tough box, trying to promote beer and so being forced to verify the ages of its participants really before they got to the juicy content. (We hear there were wild girls-on-film parties inside, but never made it past the bouncer.) Registration processes or online lead forms that request too many data fields are a sure way to kill the buzz.

Nice work by Budweiser on another “viral” video that, after more than a year, is still going strong. Television/video advertising is developing two very different standards; the relatively tame spots still used on traditional broadcast and cable, and edgier online spots that cut closer to vulgarity or nudity. Over time, the popularity of racy online spots will put pressure on traditional broadcasters to loosen the rules.

Soon, over dinner, you’ll be hearing more ads that tell you to blank off.

Thanks to Katie Krum for the tip. 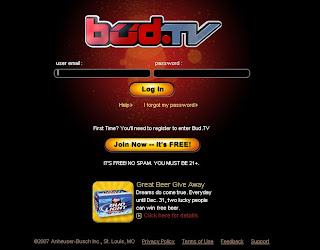 There’s a reason why Anheuser-Busch and Omnicom’s DDB bombed this year with the launch of bud.tv. You can build the most brilliant portal in the world, but if you check your audience at the door, visitors will bail. Just look at the horrible original front-door to the web site bud.tv (screen shot from back in February).

Call this the lesson of the bad lead form.

Bud.tv launched after the Super Bowl with a $30 million blitz, a “portal” site meant to lure young men with celebrity scandal, girls on film, and humor from Kevin Spacey’s Triggerstreet or Matt Damon’s LivePlanet. The site targeted 1 to 2 million users a month — and ended up with just 253,000 unique visitors in February and 152,000 in March. Traffic fell so low that ComScore stopped tracking it in April.

The site imploded because Anheuser-Busch asked too much of users. The front page asked you to sign up: First time? You’ll need to register … for what? A big black screen? In an Internet universe of free videos and full-frontal nudity, bud.tv came off like a frowning granny, asking the young boys if they really were old enough to stay out late Saturday night. The original site was actually an improvement over the long lead form that sat at the bud.tv URL in fall of 2006, prior to launch, asking users to punch in their birth dates etc. as they waited breathlessly for Bud to go live. The Bud message of the entire period was gimme gimme gimme.

Anheuser-Busch has been trying to fix the site with help from guerilla marketing firms such as New Media Strategies. The current site is a bit of improvement, offering free previews of funny videos to whet the appetite. 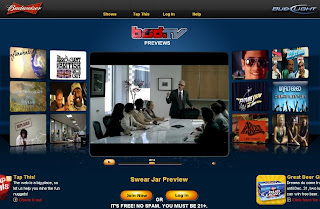 We don’t think it takes rocket scientists or web consultants to figure out the failure. It’s simple. (1) Bud.tv asked too much of users. (2) Users didn’t want to sign up for something unknown without seeing the value clearly for themselves. (3) YouTube is loaded, free, and just one click away. The lesson for Bud: if your web audience is thirsty, don’t demand ID before showing what’s on tap.