Years ago we gave a talk in Nashville about stealth marketing, or figuring out how to deselect the types of prospects you don’t want responding to you. This sounds harsh but every business has customers who cost far more to serve than they generate in profit, and marketers carefully try to avoid them. Direct mail campaigns do this all the time by selecting a list of “best prospects” (and by default ignoring others).

Now individuals can let in only the right customers, too, with Oodle classifieds. Oodle, which yesterday scored a $5.6 million round of additional funding, sells everything from $600,000 homes to $150 rat terriers. The company is experimenting with a “social classifieds” app on Facebook that allows users to screen out the weirdo factor — you know, unsavory types that may respond to your offer to sell a bedroom comforter. The concept is your classified ad will only appear in front of people whom you preview first.

The idea has pros and cons. On the plus side, if you are selling a beloved vinyl collection to make room for your new baby nursery, you may want to only let it go to a friend or someone whom you believe is an appropriate audiophile, and not the anti-Beatles nut who plans on burning the records for a local PR stunt. On the con, redlining customers has a touch of prejudice in it. Back in the 1930s the federal government tied itself in knots by withholding mortgages in inner cities, contributing to urban decay, and racial profiling has gotten insurance and credit card companies in hot water.

Right or wrong, now you can sell your personal stuff to only the people you know something about. 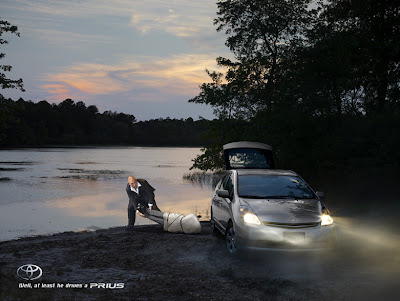 This spring a series of fake Prius ads began flooding the web, showing naughty drivers dumping bodies or making out with daughters or picking up prostitutes. We hear art director David Krulik had something to do with it.

But we wonder, are all these “fake” ads really so fake? Toyota is no stranger to edgy; its Scion brand, with help from ATTIK, launched the creepy Little Deviants campaign last year in which X-faced demons lopped the heads off sheep people. Creative director Simon Needham was quoted as saying the spots were “bound to entertain.” Silly us. Our kids saw it before bedtime and thought it was people killing each other.

There is a growing undercurrent of rule-breaking in advertising in which ads with sex, nudity, violence or shocking material are released, but somehow absolved from any formal affiliation with the product. J.C. Penney’s stripping teens come to mind. Are advertisers really not behind this? Or are people pulling strings behind the scenes to get a second standard of risqué messaging out, certain to get noticed?

And advertisers: If you aren’t involved, wake up. This new fake channel seems to work.

Tx David Griner for the catch; the demon-lop-headed campaign was for Scion, of course, and not Prius. We corrected it above.

An oldie but goodie — and sweet review of the mistakes advertisers make.

If your consumer were a date, would she still care?

And just in time for Christmas, an Icelandic cell phone ad gives us Judas and Jesus catching up via … video cell phone. It’s brilliant execution for the Sony Ericsson 3G video phone, showcasing the hot technology we can’t quite get yet in the States. If this ad ran over here, imagine the screams of blasphemy.

Religious sensitivities aside, we wonder, does the U.S. need video cell phones? Someday we may long for the ability to just chat with friends without having to comb our hair. 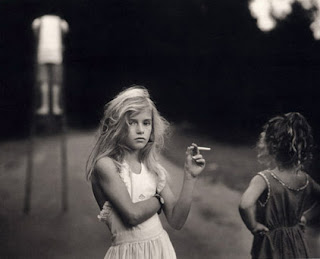 The advertising history of Camel cigarettes is a perfect case study in how to reach two demographics at once. Yesterday, R.J. Reynolds Tobacco said it will stop cigarette advertising in newspapers and consumer magazines next year, following protests that its Camel No. 9 ads targeted young teenage girls. Seems the ads, which ran in Glamour and Rolling Stone, had images of roses and lace and were a little too girlish.

This isn’t the first time Camel has been accused of dipping down into the young demo targets; back in 1991, the AMA found more children in the U.S. recognized the cartoon character of Joe Camel than they did Mickey Mouse. Joe Camel has been controversial on several fronts, not least of which was the phallic nature of his nose and chin … 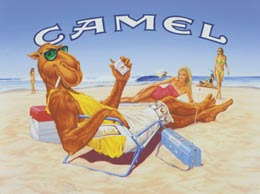 Now, we can’t say for certain whom Joe Camel was targeting, and Reynolds claimed it was adults 25-49. Wikipedia reports internal docs from tobacco execs show they had a long history of targeted the 14-24 age group, called “tomorrow’s cigarette business” — since most smokers get hooked by age 25. In one lawsuit against Reynolds, an attorney claimed Joe Camel ads boosted teen sales of Camels from $6 million to $476 million from 1988 to 1992. 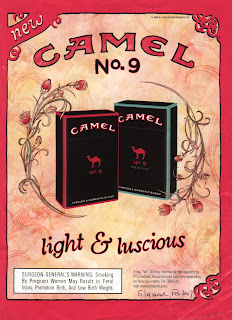 The No. 9 ads weren’t as aggressively youth-focused, but they did feature images of roses and lace … and ran in magazines such as Cosmopolitan, Vogue, and Glamour popular with teenage girls. Once again, critics said the ads really appealed to the younger demo. Reynolds has backed off by saying it won’t advertise in consumer print for at least a year. With TV, radio and outdoor also banned, now advertising will focus on direct mail and point of sale.

We find this entire controversy interesting. Smoking is bad for your health, understood. But the product is legal and manufactured and sold while tobacco companies and health advocates argue about how much communication should be visible to the public. Perhaps it is time to end all tobacco advertising completely … because all the talk about partial shackles on media sure makes for good PR, and we bet today’s rebellious youth will notice all the smoke.