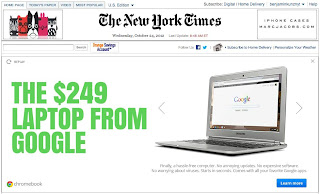 Poor Apple. Hours after it announced a much-awaited smaller iPad (plus a sexier, thinner iMac), Wall Street pushed its stock down 3%, perhaps disenchanted at the relatively high iPad Mini price of $329. And now, a day later, Google is pushing ads for a radically new, svelte laptop that costs — gulp! — only $249. Google’s machine is a thing of beauty because — while perhaps not hinged aluminum that feels like an alien space probe in the hand — it works on cloud-based Google software, with nearly unlimited storage online, no need to backup files, and no worries about pesky viruses. It’s an advance over the prior Google Chromebook, which was clunkier and initially cost $499. It’s perhaps the perfect inexpensive gadget to give a 12-year-old for homework. And of course, it ties users into the Google content-and-search ecosystem.

All of this reminds me of a comment an analyst made on NPR in the late 1990s, during a news segment on Internet and e-commerce. When asked to predict the future of digital media, the analyst said, and I paraphrase: “You don’t walk into a room today and go, wow, this place is electrified! We just expect rooms to have wall outlets and light bulbs. In a few years, digital technology will be just like that — with connectivity everywhere.”

The cost of keyboards, glass screens and computer chips is falling so rapidly that soon marketers may give devices away as incentives to spend more time with their messages. 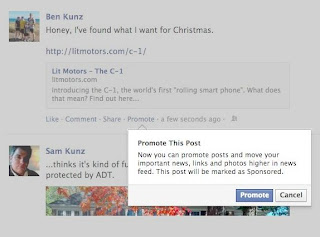 Mark Zuckerberg, how investors have underestimated you.

Depending on how you look at it, Facebook is either on a tear or washed up. eMarketer predicts Facebook will generate $5 billion in revenue this year, with $4.2 billion from advertising, taking 4% of the global digital ad spend in 2012 — not too shabby. But Facebook also faces the law of large numbers, meaning it’s hard to grow once you’re already damned big. That eMarketer forecast of August was downgraded by $1 billion from its previous prediction in February; ouch. And Facebook has two other huge challenges — it’s making pennies from mobile and online video, the fastest-growing media channels in advertising, and Facebook is still a weakling in the Asia-Pacific, the market expected to grow fastest in ad spend over the next few years.

So Facebook made a brilliant move this month to diversify its ad portfolio by going … straight to you, dear consumer. Facebook now invites individuals who post something to pay to promote their missives at $7 a pop, to make sure more people you connect with inside Facebook actually see you. Let’s put aside for a minute the fact that Facebook is fighting its own EdgeRank algorithm that helps us enjoy our social feeds by blocking old girlfriends or uncles with annoying politics, and consider how much money Facebook could make:

$1.5 billion is nothing. Facebook is just getting started with your data.

There’s a much larger play here as well — if you pay for your post with a credit card or PayPal, for the first time Facebook is training you to give it your payment mechanisms. OK, so you’re addicted to Facebook. And Facebook has your credit card. Whatcha think you’re going to do when Facebook makes it easy for you to buy stuff inside Facebook?

I’m not talking those little Facebook ads for things you don’t want — I’m pointing to a store that rivals Amazon.com with everything you desire on your own terms. Facebook has already built this store: millions of brands have “Facebook pages” touting Pepsi, Coke, Barack Obama and Mitt Romney. All Facebook has to do is install the cash register, and you better believe when those pages become e-commerce functional, brands will promote ways for you to buy stuff inside Facebook.

And of course Facebook, with your payment information now loaded, would helpfully transform your mobile Facebook app into a mobile wallet … extracting a cut of the billions of dollars that are paid to AmEx, Visa and Mastercard in annual financial transaction fees. Go out for a nice Italian dinner and swipe your newsfeed at the register, and you could pay while also telling all your friends about the great night out.

It’s all so brilliant. A $7 offer. Which leads to $1.5 billion in revenue as Facebook collects your credit card numbers. Millions of brand pages waiting to be turned into an online mall. Marketers promoting Facebook for free by including their “Like us on Facebook” in every one of their own ads, stimulating demand. And a Facebook mobile app that, once preloaded with your credit info, could rival Visa. 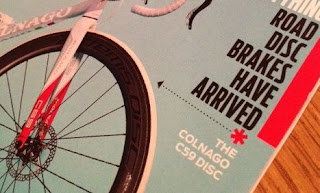 If you want to know how to make your product reach all of humanity, you need to think about God, bicycles and viruses.

Richard Dawkins didn’t believe in God but he did coin the concept of a meme, a cultural idea that spreads like a virus through human society. If you work in marketing or advertising, you’re in the business of meme propagation whether you know it or not — at core, you’re trying to make an idea spread like wildfire, at first with paid advertising but eventually, you hope, organically, until everyone ends up wearing miniskirts or their baseball cap on backwards because, well, everyone else is doing it. The history of ideas that suddenly seem everywhere is long and often silly: Hula hoops. Men’s neck ties. Women’s lipstick. Religion. Yes, God is a meme, and he’s been the longest lasting one.

What’s interested is how such individual ideas first take root. The photo here shows an upcoming product meme — an evolution in bicycles called disc brakes. If you ride bikes infrequently, you may laugh at cyclists with their obsession on design nuance (and whacky bright-colored clothing). But look closer and there are reasons for cyclists’ madness. Skin-tight shorts actually stop chafing and keep cloth from flapping around their delicate parts. Bright colors prevent them from being hit by cars. And bicycles with ever-more-sophisticated lightweight frames make a big difference when you cycle for 3, 4 or 5 hours a pop. It may seem ridiculous to consider spending $4,000 on a child’s scooter-toy, which is about what high-end bikes cost, but once you move to carbon fiber that propels like the wind and absorbs nasty vibrations from the road in hour 6, you’ll never go back.

This month Bicycling magazine predicts disc brakes — that little round wheel near the hub in this photo — will soon be on most road bikes. Disc brakes have been used for years on high-end mountain bikes, where they work extremely well in allowing controlled descents on rocky terrain, but most road bikes still use the older “caliper brake” technology: two little rubbery flaps that clamp down on the outer rim of the wheel. Trouble is, high-end bicycle wheels are made from carbon, the pressure from those rubbery brake pads can cause carbon to fail, and those traditional caliper brakes work like crap in the rain — sometimes causing the rear wheel to lock up and the cyclist to skid to pavement. Disc brakes work dramatically better than those stupid rubbery calipers, even in the rain, giving a cyclist effortless control.

OK, so now you ask, “duh, why didn’t we get better disc brakes before?” Well, it turns out disc brakes have problems too — they weigh more, put stress on the frames so frames need to be redesigned, and if you really crank down hard on them they can overheat and cause total failure. Not cool when approaching an intersection at 40 mph. But disc brakes will come, because manufacturers will begin pushing them and working out the kinks in the technology, until someday soon everyone who is into cycling will feel the need to upgrade.

Product scale starts with a formula

Why do entire product categories go through such fits and starts until their meme scales? Because, like any marketing message trying to break through, the idea (meme, rhymes with “gene”) must overcome the formula for going viral:

As we’ve discussed before, this simply means more people must pass the idea along than those who stop passing, or absorb it. Cycle time (unrelated to bicycles) is simply the speed of each stage of potential message passalong.

This is why it takes a long time for new product ideas, even brilliant ones, to scale. Markets of established products have enormous absorption rates, because the entrenchment of older product designs raises passalong friction. For instance, there is a reason you likely have not bought an electric car, even if you hear they are faster and cleaner, because every street corner has a gasoline station and you’re not certain where or how to charge an electric car’s battery. And admit it. You also are worried you’ll look like a geek. You are unlikely to be the first in your office to wear pink neckties, but if next year pink power ties come back and 10 people around you don them, you’ll be tempted to join the throng. The sheer mass of other options creates a high absorption rate that blocks the new meme from spreading. But if the idea can break through, and gather momentum among the contacts surrounding you, the perceived absorption rate falls, creating a virtuous cycle of adoption.

You are more likely to pass a new idea along if you are less worried about peer pressure. New product ideas scale only when they achieve critical mass that allows non-early adopters to feel more comfortable in spreading the idea. If M in the formula above increases enough, it begins to lower A, which makes M get bigger and bigger until A all but disappears. This is why you wear pants and not a kilt, and why most people in your local community belong to one or two similar religions.

All of this means when the guy next door whom your wife thinks is kind of cute buys a new road bike with disc brakes, you’re going to rush out to buy one too.