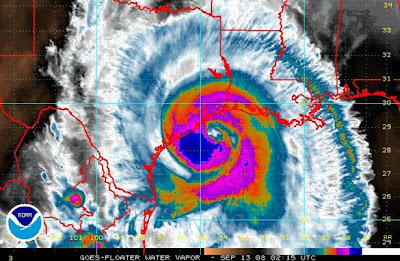 We came across a debate on Twitter recently where Amanda Chapel, the faux persona charged with poking fun at social media thought leaders, referred to Søren Kierkegaard‘s existential theories that people hide the meaninglessness of life by drowning themselves in diversions. (In case you miss the Amanda Chapel arguments, she’s a mask, she’s brilliant, she’s caustic, and she thinks the social media craze is overblown — which is right, of course.) So we read up on Existentialism and came to the concept of dread.

Newscasters love dread; the weather forecasts are filled with it. In the days before Hurricane Ike slammed Texas, CNN, Fox News and the other broadcast outlets were salivating at the thought that cities could be decimated, Galvestan drowned, ships sunk at sea. “CERTAIN DEATH!” cried the headline at CNN.com.

One thought on “Hurricane Ike and the joy of dread”