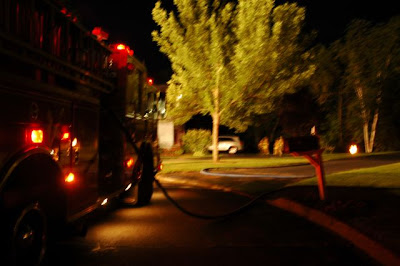 Two fire trucks showed up in our driveway tonight, lights blazing, so we walked out front to see tall men in yellow uniforms rushing toward our neighbors’ house. Our first thought was to ask, “what’s going on?” Our second was, “stay out of their way.”

The firemen quickly found a leaking propane tank, attached a hose, and set a 5-foot flare to burn off the gas before it could spark.

What interested us most was our reaction to the alien arrival of strobe lights and officials in uniform. We expected them to tell us what to do, and we were ready to comply. It all reminded us of psychologist Stanley Milgram’s classic experiment on obedience to authority, in which volunteers were told to administer shocks to hidden people (really actors) and readily complied, even as the actors grunted and groaned. Milgram expected most people to stop giving shocks when the “recipients” screamed; instead, 65% of volunteers followed instructions to increase voltage all the way to “danger” levels. Volunteers didn’t do it to be mean; they did it because an authority, the instructor, told them it was the thing to do.

We don’t mean that firemen do anything wrong; we’re pretty happy they saved our neighbors’ house. But we think about the people who follow authority based on instinct, and are surprised to find the same response inside ourselves. Perhaps human evolution ingrained response to leadership as a survival skill. Perhaps that is why so many organizations, from military to police to schools to churches to soccer clubs, use uniforms to guide packs today.

The instinct to obey is strong, whether the cause is right or wrong.