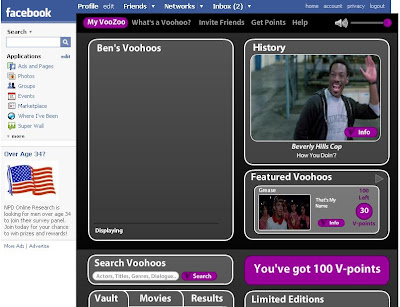 We’ve been critical about internet widgets, or mini-apps, which promise advertisers the chance to go viral with their marketing message but often fail to do so. Paramount, however, has found the sweet spot with its new VooZoo app on Facebook. VooZoo allows users to grab small snippets of famous films (from the Paramount library) and forward them to friends — potentially a blockbuster application in that you can tell your boss to show me the money!

The Paramount widget ties three things together beautifully: (1) the user need to interact socially, (2) the application itself is the message, and (3) the message is tied closely to the sales channel. A little button at the tail end of each film clip allows you to order DVDs from Paramount. Any time you message someone with a clip from a film, you are forwarding an undeniable ad for that same film.

The application was developed by FanRocket, an agency specializing in viral marketing within social media. By making the sales message equal the user’s social message, FanRocket got this viral app right. We also note the bravery Paramount shows by giving away clips from its films — a good lesson for any marketer in the social media age. If you want to make it big, you have to give up some control.

(Note of confusion: The app is VooZoo, the clips are called Voohoos. Whatever. Add it to Facebook here.)

One thought on “Paramount’s VooZoo: This widget will work”