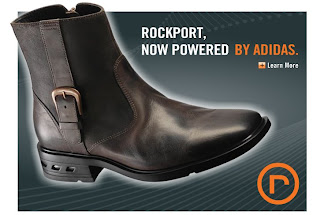 How hip are Rockport shoes on a scale of 1 to 10? Dunno? That’s the problem faced by this lesser-known brand. So in June, Rockport launched a brilliant re-branding campaign by Hill Holliday of Boston, which cleverly opens new playing fields both geographically and demographically. It all makes financial sense, since Adidas bought Reebok in 2006, Reebok owned Rockport … but there is more going on.

Geographically, it’s a stroke of genius. Rockport is not well known outside the U.S., and Adidas pretty much owns Europe. Rockport had international sales of only 36% in 2006, but with this Adidas partnership, it now targets 50% by 2008. Adidas will open doors abroad.

Demographically, it’s also brilliant — because there are 79 million Millennial consumers in the U.S. ages 9 to 28 who are growing up fast, and heading for a more-formal workplace. This group has been focused on sneakers and jeans and so may not know Rockports didn’t used to be cool. This group can be reached easily, since Millennials are said to consume about 20 hours of media a day in only 7 clock hours.

And Millennials love soccer. The U.S. has been slow to adopt the sport, which started on our soil when Rutgers whipped Princeton in a football game in 1869. Today, we can’t even call it by its proper name. But MLS launched in 1996, today the U.S. has 12 major associations, and suburban moms and dads are now consumed by soccer. The brand of choice on those fields: Adidas.

Rockport, in essence, took Michael Porter’s five competitive forces of buyers, sellers, competitors, substitutions, and entrants, and focused on the market entrant. But instead of looking for a company entrant entering the field, it found a new demo entrant: The young kids who will soon change cleats for something suitable at their first job.