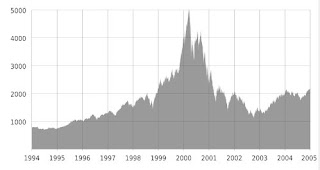 Be careful what business news you share with teenagers — they have long memories.

Today new college freshmen are abandoning IT and computer science studies, and switching to economics. The number of frosh chasing economics degrees is up 40% in the 2003-04 period from five years earlier, while new computer science majors are down 50%. The trend is so significant that big players like Microsoft are seriously worried, and launching new training programs to jazz up computer classes.

We can’t blame the popularity of Freakonomics for this (the book was published in 2005, after the trend began). Academic types believe three things led to the youth shift: the aftermath of the 2000-2001 dot-com bubble burst, in which teenagers saw parents’ savings wiped out in the NASDAQ implosion, shown above; the much-talked-about outsourcing of computer jobs from the U.S. to other nations, which further scares youth about future job prospects; and the simple fact that many CS courses are SO BORING in the first year.

The dearth of American computer talent will be filled by experts from abroad. The magazine The American reports that in April, the first day H-1B visas were allowed for U.S. firms to hire skilled foreigners, the government received 150,000 visas for 65,000 openings. The good news for today’s college kids: If they do study computer science, they’ll be among the few U.S. citizens qualifying for tomorrow’s wide-open technology job market.