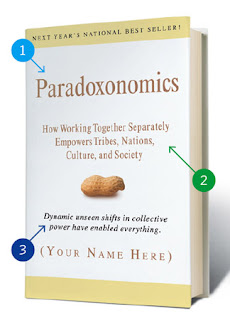 Wired’s big-idea book generator is brilliant. The concept here is that only a few of the thousands of business books published each year break out, so why not follow the formula of best sellers?

1. Create a title-as-theory. Should sound like a bad B movie. Ours will be “The Marketing Zombie from Payback Lagoon.”

2. Give it a subtitle, to explain what you really mean. Ours: “How to Unlock the Transformational Power of the CMO Before She Gets Fired.” This doesn’t have to make sense, but it will have more terms to sound even more important. Also helps if it makes executives squirm in their airplane seats.

3. Write an even more detailed premise to pitch the book, using words such as “dynamic,” “collective,” “profound,” and “previously hidden.” Wired recommends terms such as “tribes” and “the power of unconscious thought.” We’re thinking “The Secret Signals CEOs Send to Marketing Execs Before Calling in HR.” Nice.

You’re done. Send the memo to a publisher, get contract, punch up Word, and jump on stage next to Malcolm Gladwell. You’ve just written the next Big Idea Book. Thanks, Wired.