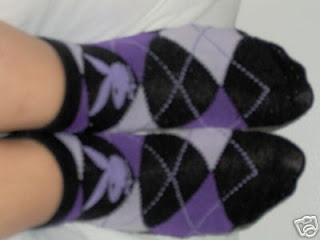 You probably know that eBay is the place to find strange items such as these lovely, used, plaid Playboy bunny socks. What you may not know is eBay drives more than 10% of all online retail commerce in the United States. Ka-ching. The online auction house lists $14.6 billion in retail items, compared to total U.S. online retail sales of $130 billion in 2006.

eBay has been feeling a pinch, though, with declining listings perhaps because finding buyers is getting tougher. Every item you try to sell on eBay must compete with 559 million other auction items. So-called “power sellers” who run eBay stores are down 25% from last year. Fighting back, eBay has launched a social networking site called Neighborhoods to get users to share photos, post reviews, and hopefully stay a little longer.

Don’t know if it will work, but we hope so. What kind of world would it be without used Playboy socks?