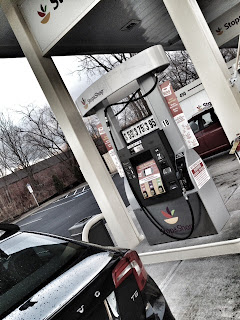 Stop & Shop, the northeastern U.S. grocery chain, has created a fascinating loyalty program tied to gasoline. If you use a loyalty card to buy groceries, you can later swipe that card at participating gas stations for supposedly big savings. Here’s the pitch:

“Save 10 cents per gallon for every 100 Gas Rewards points.
Earn 1 point for every $1 you spend with your Stop & Shop card.”

I love this (and, confession, I use this), because nothing feels better than pulling up at a gas station, flashing my Stop & Shop card, and seeing the price per gallon fall. But one day, I did the math … and realized all of this effort was saving me only 1%. In aggregate, I calculate Stop & Shop only gives away 0.25% of all its grocery revenue to fund this program.

What gives? This tactic is called “price obscurity,” a version of price framing in which the true value of a bundled product and its price is obscured by making it complex. This Stop & Shop program feels like a huge savings, when really it’s tiny.

Here’s the math. Look closely at the promotion, and you’ll notice the discount is broken into two lines:

Hm. Humans aren’t good at mentally calculating currency exchanges, and a double exchange is even trickier. It’s no mistake that the marketers broke this promotion into two lines that are hard to connect. So let’s move the equation into one line. We’ll also need to revise the second line to $100 in spending, so it will match up with the first. Finally, we’ll reverse the order, starting with your grocery purchase so it makes more sense:

A dollar spent is a penny saved. That’s OK, about in line with every other rewards program out there (see: credit card cash back offers). But a penny is not a huge savings, and it sure isn’t as sexy as the promotions offering 10 cents, 20 cents, or 30 cents off per gallon … or more!

This brilliant promotion is giving Stop & Shop major buzz all for 1% savings. The grocery store likely benefits as well from slippage, the half of customers who won’t care about participating and then the portion of the remainder who likely stop by a participating Shell or Stop & Shop gas station only every other fill-up … meaning its true cost for this promotion could be 0.25% or less of all grocery revenue. Points also expire in 30 days. You get the idea.

So, 1% total potential return on grocery spending, for the fraction of customers who remember. That’s chump change … but I confess, it still feels great. I’ve swung by and “saved” 30 cents off per gallon in a recent fill-up. Tied, obviously, to $300 in recent grocery spending for my 1/1000 return per gallon price savings, which at 10 gallons saved me 3 bucks, or 1% back from my groceries … er. Logic be damned. Stop & Shop, you made me feel good with your clever math, and odds are I’ll keep driving back.