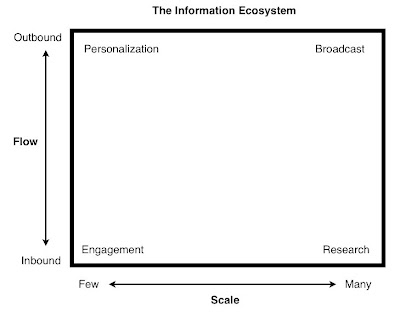 To understand why Pepsi has now fallen behind both Coke and Diet Coke in sales for the first time in decades, let’s examine the tradeoffs between two communication choices: inbound customer engagement and outbound advertising messaging.

We’ve explained the Information Ecosystem before, a simple model showing how information flows (inbound or outbound) to any group (of a few or many). Spend 10 seconds examining the model above and intuitively you’ll see that communicators — advertisers, marketers, organizations, husbands and wives, parents and children — have four tactics at hand. You can broadcast outbound to many; pull research in from many; personalize outbound messages to a few, or engage in inbound communication from a few. Four paths, four tactics, all with their own value given your objective and audience composition.

The biggest mistake marketers make is falling in love with only one tactic. In the 1950s, broadcast was king, in a world where only outbound advertising at scale was possible and communicating with small groups or individuals was too costly. In the 1990s, some companies embraced 1to1 personalization as the future of all communications, eschewing broadcast advertising empowered by new databases that could record preferences of individual customers. Today, in 2012, many companies buy in to social media gurus who shout engagement is the new panacea.

But is engagement really at odds with broadcast messaging? Of course not. Both play a different role on the same field: 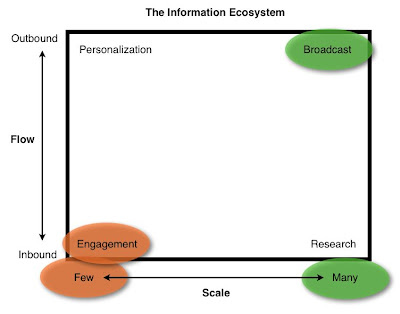 The colored circles on the Information Ecosystem above show the debate that often occurs in marketing boardrooms. We must do one or the other, the arguments go. Some see a world where consumers still watch 5 hours of TV a day and commute in cars for 2 hours, so mass-media advertising must work. Others see the shift to Internet, laptops, text, smartphones, apps, social networks and tablets, and think digital-based engagement and word of mouth propagation are the solution.

The truth is, for most companies, both points of view are right — because the dynamics coexist with each other.

When to pick engagement or broadcast

Engagement is a valid tactic if a few members of your audience (say, consumers) have higher value to you or influence over their peers. This variance was called by Don Peppers in the 1990s a “customer value skew,” and the steeper this skew, or range in difference among customers, the more sense it makes to treat different customers differently.

In financial services and airline bookings, where some customers bring much more money to the table than others, engagement makes sense; but for commodity products, or services that appeal to broad swaths of consumers, engagement is a tactic best reserved for emergency situations, a “Motrin Moms” meltdown where a company must be ready to swoop in if negative attacks scale rapidly. If your customers are really different amongst themselves, or have potential to be wildly influential, engage away; if not, downplay this tactic.

On the other extreme, broadcast push such as advertising is best for companies trying to send a message out to masses of customers who all may need relatively the same thing. This doesn’t mean everyone will want your product; but it does mean that even if you are targeting 5% of the population, the needs within that group are similar enough that outbound broadcast can stimulate demand. Education, awareness, interest, consideration are all dynamics driven by advertising to the masses, and the seeds for downstream word of mouth. Like a spotlight, you can target the outbound communications to small groups and do so with efficiency; but there is nothing wrong with pushing messages out to the masses since it is one of four valid communication pathways in the overall Information Ecosystem. The Super Bowl and Academy Awards got lots of chatter among consumers in 2012, and the starting point for both was a major television broadcast.

The lesson of Pepsi

Finding the balance is difficult. In 2011, PepsiCo slashed outbound ad spending on its Pepsi brand in half, down to $20.1 million, focusing more on social media engagement. In March of 2012, news broke that the Pepsi brand had fallen from No. 2 to No. 3 in sales behind Diet Coke — a huge black eye for Pepsi, this being the first time in two decades it trails two Coke brands. Now Pepsi has said it will boost 2012 ad spending up by 30%. “We need television to make the big, bold statement,” Massimo d’Amore, chief of Pepsi Beverages Americas, told the Wall Street Journal.

This is not to say Pepsi’s move toward social-media engagement was wrong; but it did err in overweighting engagement and gutting broadcast for what is, at core, a commodity product in a highly competitive category. Pepsi failed in its judgment because it did not evaluate its customer base value skew accurately — most customers have similar value to Pepsi (we can only drink so much a year) and a similar need (we’re thirsty), and few have influence over their peers’ beverage consumption habits. For a carbonated soda pop, treating different customers differently makes little sense.

The tactics of engagement and broadcast are not opposed to each other, and can fit in the same organizational marketing plan easily, provided the role of each is understood to manage customers in the appropriate manner. There is no ROI on being invisible in a marketplace that needs education; there is also danger in not responding to the small groups of influencers or customers with the highest value, so engagement may be required as well.

Do you need to tell everyone about a new thing? Or is there a steep customer variance in your target base that, if managed, could turn the tide of your business? Answer those two questions, and you’ll have an initial cut at how to invest communication resources.

8 thoughts on “The false dichotomy of engagement vs. broadcast (or why Pepsi sales are down)”