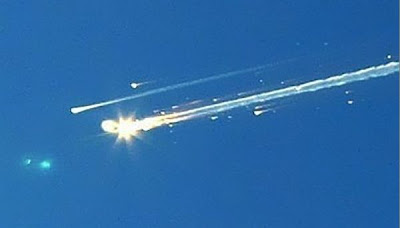 This is a story about the evils of PowerPoint. It was first told by Edward Tufte, the most brilliant mind alive on information design, whom a friend of mine once described as “the voice of God criticizing mankind.” Tufte wrote the book on graphics theory, The Visual Display of Quantitative Information — and in one of his most intriguing side riffs has lambasted PowerPoint for being a boil on human communication.

Tufte has explained how one horrible PowerPoint slide led to the 2003 Space Shuttle Columbia explosion — or more accurately, the horrible bullet structure PowerPoint gives us caused the disaster. The problem is PowerPoint encourages writers to use clipped jargon that is hard to understand — and if the point fails, bad decisions get made. As you likely recall, Columbia did blow up on re-entry, after a large piece of foam broke off during launch and damaged the edge of a wing. Before the Columbia accident, foam had crumbled off of many other shuttles during launches, so an internal report was crucial in determining how much risk the foam presented. Would it be a lot of foam? And could it hit the shuttle elsewhere with a lot of force?

Alas, the internal NASA report was presented in PowerPoint.

The NASA slide below has a series of nested bullet points that start out with a blase headline about “conservatism” — sounds OK, right? — overuses the word “significantly” until it doesn’t mean much, and then at the very bottom buries the main point that foam debris that falls off and could hit the shuttle on launch is, ahem, 640 times larger than previously estimated. If the truncated phrase “Volume of ramp” had been expanded to read “estimated volume of foam debris that hit wing,” and the headline made punchier saying “risk is 640 times greater than predicted in prior safety estimates!”, executives in the room might have sat up and gone, holy shit, this entire shuttle could blow if we don’t fix this.

They didn’t, because the risk was a fourth-level sub-bullet in PowerPoint.

Tufte’s point is that PowerPoint mimics the hierarchical structure of big business organizations, which is a bad way to communicate. Information is sliced into logical bits and truncated to the point of unclarity; as the information is passed up through an org structure, slides are deleted until only a brief summary remains. Context is lost; key points disappear; the narrative is destroyed. Or in this case, the astronauts aboard the Space Shuttle Columbia died.

What does Tufte recommend? Give people in meetings a short written report, that they digest as the meeting begins. Then talk, talk, about the real issues. 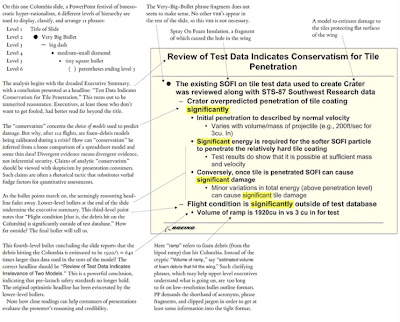