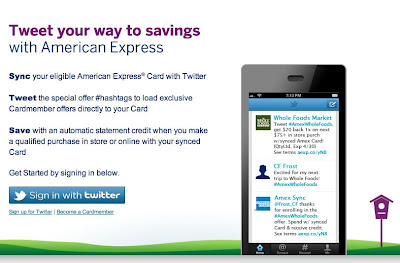 Or coupons, anyway. American Express has launched a promotion encouraging its cardholders to “sync” their card with Twitter. Then, if you want to load coupon-type discounts onto your AmEx card from merchants, you simply have to tweet a #hashtagpromotionoftheday to your Twitter followers, and AmEx will automatically reward you with a discount on your card.

At first glance this may seem cool, until you consider the user experience. Say you and I are friends via Twitter and #heysave$10onMobilgas! we’re having a conversation online and #dontmiss10%offpantiesatVS our conversation seems somewhat #$1friesatMcDs! different perhaps. Better yet, as you scan the broader stream from all the people you follow on Twitter #paperonsaleatStaples! the overall ecosystem seems somehow #morefreefriesatBurgerKing changed.

From a marketing standpoint, this is brilliant, because it costs merchants almost nothing (discounts are a form of price framing in which prices can be jacked up and down for a perceptual benefit only) and could spur demand for both incremental sales and AmEx usage. French-fry sellers and American Express both get upticks.

But for social media users, an intrusion of paid, unexpected marketing messages could diminish their experience. MySpace went south after becoming too crassly commercial. Facebook grew to immense popularity by being careful not to overload users with advertising (Zuckerberg famously rejected banner advertising in his initial launch years, and eventually created a more subtle ad format off to the side). Now, Twitter is trying to catch up in advertising revenue with in-stream intrusions. The question is whether the blurring of the traditional hard line between paid advertising and unpaid human/editorial content, by asking participants themselves to spray marketing messages, is damaging to a network in a way that will eventually reduce usage, audience, and viability.

We could be wrong. Maybe tweeting #thisoffermeansmoretomethanyou will make us all more popular.

2 thoughts on “AmEx encourages consumers to tweet for cash”