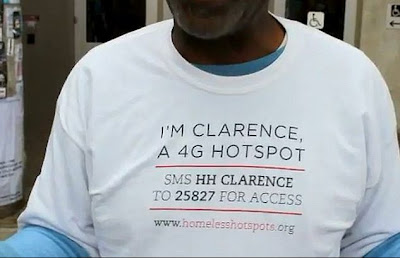 Everyone wants to go viral, yet so few have the balls to do so.

BBH Labs just showed how it’s done by hacking SXSW Interactive, an Austin tech conference with so many product launches that breaking out there is nearly impossible. (If Twitter showed up this year, everyone would yawn.) So BBH came up with a plan to draw attention to the plight of the homeless by turning homeless volunteers into “mobile hotspots” — armed with MiFi connections that could get a nearby user online, provided he or she spoke with the homeless person and got the passcode. BBH gave simple instructions on its blog: “Introduce yourself, then log on to their 4G network via your phone or tablet for a quick high-quality connection. You pay what you want (ideally via the PayPal link on the site so we can track finances), and whatever you give goes directly to the person that just sold you access.”

Which is exactly the point. Now millions of people are hearing about the plight of homeless people in Texas, and how an agency used technology to get them fleeting jobs. You’re probably thinking, wow, those poor homeless people. Maybe tomorrow you’ll notice one on a street instead of walking by in oblivion. With a few mobile handsets and cheap printed T-shirts, BBH Labs has accomplished what $1 million in advertising could not have done.

The only conversation that counts is the one that makes you think. Saneel and BBH Labs, all we can say is, well done.