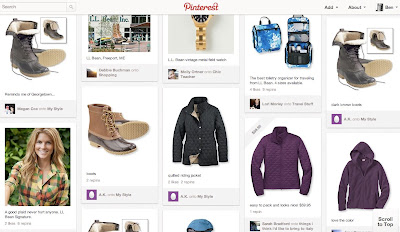 Brands are intrigued, because of course they want you to “like” or “pin” them, so in 2011 many set up Pinterest pages hoping for another broadcast medium.

Wait … did I say broadcast? Well, let’s look at L.L. Bean’s Pinterest site as an example. Boots. Flannel shirts. Stuff you can buy. It’s a catalog. There’s even a picture of an L.L. Bean store. Sigh. This is sad, because the outdoor brand has millions of ways it could tell inspiring stories. If you visit its flagship store in Freeport, Maine, you can’t help but be inspired to go camping, spend time in the dark woods with family and friends, pilot a kayak down a roaring river. L.L. Bean tells a story that many want to believe; most Americans who buy outdoor gear don’t really spend weeks outside, but vicariously imagine a rugged adventure under sun and stars. L.L. Bean could fill 90% of its Pinterest pages with candy for that desire, and slip in a few products in the remaining holes. But, alas, it appears the social media editor for Pinterest just uploaded the entire L.L. Bean product catalog. Or it could be consumers simply like to “pin” product shots as well; see update below.

Now, consider the savvier Whole Foods’ Pinterest. Here, instead of products, you’re greeted with photo collections about garden sheds and cooking for the holidays, and as you dive deeper it feels like Martha Stewart is sharing inspiring scenes and scents from beautiful homes. (I’m not the floured-up rolling pin demo, but I’m sure this snuggier stuff has an audience.) Whole Foods inspires us to go do something. Likely, that will require a shopping trip, but that’s the backbeat, not the lyrics here.

The great tragedy of social media is most brands use it solely to identify you and then spray you with one-way broadcast messages that promote their brand. “Engagement” is a pseudonym for “tagging a prospective customer.” This is understandable. No big organization can easily interact in two-way dialogue with millions of customers. But L.L. Bean, can’t you try a bit harder than showing duplicate images of furry boots?

Update — Laurie Brooks, Sr. Public Relations Representative of L.L. Bean, responded as follows: “I’d like to provide a clarification to your blog post. L.L. Bean has a very robust brand social media presence, that does not yet include an official Pinterest account. I believe the link you posted is an aggregate of all Pinterest users that have pinned L.L. Bean. We are big fans of Pinterest and hope to be active in the space in the near future.” The L.L. Bean Pinterest page appears to be under development here. The other page here http://pinterest.com/source/llbean.com/ is the No. 1 organic result for “L.L. Bean on Pinterest” and has been reported as an L.L. Bean site elsewhere in the press, but apparently is a crowdsourced compilation that resembles a product catalog. Thanks, Laurie, for the clarification.

Originally posted on Google+. For another view of how Pinterest is an evolution in social media, don’t miss Douglas Brundage’s analysis here.

4 thoughts on “The tragedy of L.L. Bean’s Pinterest (updated)”