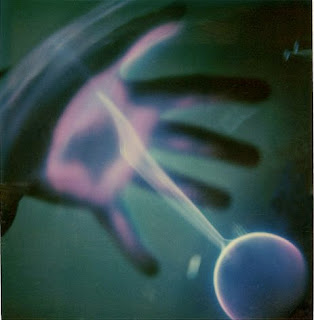 Haptics is a term meaning touch, the non-verbal forms of communication such as shaking hands or kissing on the cheek that involve sensations of the flesh. But if you read sci-fi such as Ernest Cline’s excellent “Ready Player One,” haptics provide touch feedback for a virtual future. Sure, you’ve seen 3-D movies. But imagine immersing yourself in a 3-D virtual world, either via giant flatscreen TV panel or a pair of goggles, and having gloves, leggings or a body suit that provides tactile feedback. You touch something, and via minute pulses in the gloves or suit, that something touches you back.

With high-definition virtual projections and haptic feedback, you could leave this world for an entirely new one.

Apple is playing around in this space now, adding teeth to speculation it may soon launch high-end TV sets with glasses-less 3-D. This patent details Apple’s plan for a haptic “feedback device” which uses a grid of sensors to (a) track where your body part is and (b) provide a feedback sensation when you move your hand, or whatever, through space. In technical terms:

“The haptels are coordinated such that force feedback for a single touch is distributed across all haptels involved. This enables the feel of the haptic response to be independent of where touch is located and how many haptels are involved in the touch. As a touch moves across the device, haptels are added and removed from the coordination set such that the user experiences an uninterrupted haptic effect.”
What does this mean? If you see a bottle floating in front of you in a future TV commercial, you could reach out, touch it, and feel the glass curve. If you play a video game on a giant 3-D screen, when you punch your opponent, your fist will feel the impact. Other than the obvious porn implications, computer and entertainment interfaces may soon no longer need keyboards or glass pads or remotes. Because unlike Kinect-type technology that only tracks your motion in space, you will be able to “touch” the projected elements in the space in front of you.

In “Ready Player One,” Cline imagines a lonely teenager who rents an apartment, staying inside to play virtual games clothed in a haptic suit, running on a circular treadmill, lost in a brilliant artificial world far away from this one. Now, Apple is making it real.

Microsoft Word, we hope you can keep up.