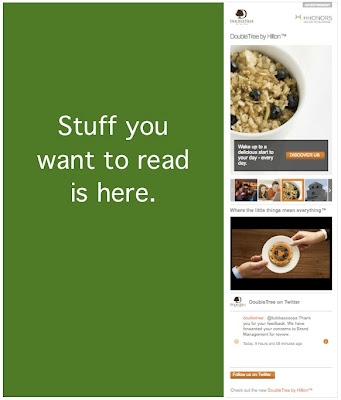 Some people aren’t keen on banner ads because they clutter up web content for consumers and have low response rates for marketers. They work, but making them work is a science. This is why we were elated when AOL announced Project Devil in October 2010 — a new ad format that would prettify banners, take up a full third of a web page, and put the editorial “stuff you want to read” in the remaining two-thirds as seen in the image above. The ads were both bigger but less obtrusive; cleaner, like a magazine layout; and able to hold several components including video for just a single advertiser. If it worked, the reading consumer would see less clutter and the advertiser would win more splash — both parties win!

Alas, Business Insider reports Devil Ad sales are down in Q1. AOL’s overall audience is down too, sliding in the U.S. from 60 million monthly uniques when Devil Ads launched in October 2010 to 41 million today, according to Quantcast. The ads cost much more than regular banners, about $48 CPM vs. the $2 to $4 CPM smart buyers can get through ad exchanges or ad networks. Apparently a 12x price increase didn’t offset the beauty and functionality of digital ads that don’t get in your way.

2 thoughts on “Why banner ads are ugly”