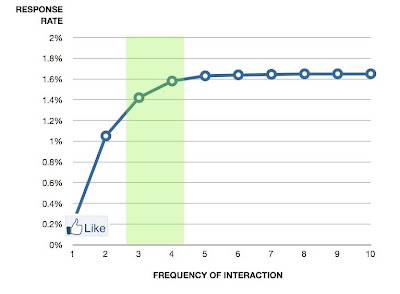 Imagine walking into a bar and meeting the love of your life. Your eyes lock, a flash kindles, and immediately both of you realize destiny has arrived.

So you walk up to her and say, “I like you,” and then walk out of the bar forever.

Good tactic? Nope, because your communication had no frequency.

Frequency has been a basic advertising concept for a century, the logic that repeat impressions are required to drive any action. Alas, this is where social media engagement falls down, because most “engagement” in the space equals just 1x frequency. For years now, marketers have been pushing Likes on Facebook, or similar social media actions such as retweets on Twitter, as a new metric indicating an audience is interested. But what happens when someone Likes your brand on Facebook once? They click a button, then walk away. You’ve had one tiny interaction. Sure, they may now be subscribed to some outbound stream, but that push followup messaging is just another form of broadcast media, especially at scale.

Now Facebook is addressing this problem; VentureBeat reported on Thursday that FB is expanding its “Like” functionality to include other “Actions” — a series of verb terms that could include “Read,” “Watched,” “Listened,” or custom responses such as a foodie site that could post a button for “Cooked.” Facebook Actions would solve several problems with current social media response:

+ It allows for nuance, the various stages of consumer engagement, which could boost response.

Now, an enterprise trying to engage customers in social media can do more than push for one Like — it can add shades of subtlety that bring consumers back for repeated interactions. Imagine Ron Paul trying to win your vote. It’s unlikely he’ll get you to Like him immediately if you are not in his political camp, but you might Argue, Debate, Listen, Consider … and eventually be persuaded to Like his message later. The more variations of engagement organizations provide, the more chance that they’ll move prospects up the response curve. And every additional interaction creates another ripple in the broader social-graph stream.

Sure, all this could create a vast online silliness, a cluttered bunch of buttons for people to click on. With Diggs, Tweets and +1’s all competing for space, social response controls may become as ridiculous as a 1980s’ flight-simulator videogame interface. Facebook Actions could also devalue the already-fuzzy currency of Likes; how in the world do you score 2,000 “Cooked” mentions for your CFO? But let’s give Facebook credit for trying; at least now, like rethinking the true love you met last night, you may get another chance.

One thought on “Facebook Actions vs. the frequency problem”