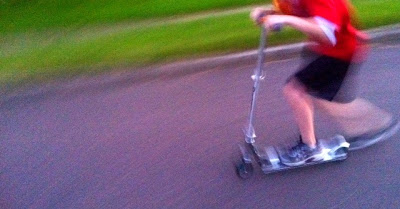 The secret dream of anyone who manages an ad budget is to not pay for the next wave of customers — because in this fantasy, culture will decree everyone must have the product, so the product will begin to sell itself. Think of tulips or Sony Walkmans or Razor Scooters or iPads, all mass crazes in their day. Marketers long for viral success, the rapid scale of their idea throughout the population like a powerful virus.

Yet not every concept thrives, and most fail rapidly. Charlie Sheen was a hot topic a few months ago, but is now fading in your memory as a troubled TV star. Japan’s nuclear disaster was a major concern in March, but you’ve stopped worrying that radioactive clouds may blow your way. You once needed the latest iPod, but now if you drop the little gizmo on the sidewalk, you think, oh well.

Society is filled with two types of ideas, the ones such as religion and hairstyles that last in human minds for centuries, and others such as Razor Scooters that come and go like mist. Why do only some ideas spread? There are four factors:

To understand why viral success matters, first learn the word “meme.” If you work in marketing and don’t know it, you’re missing the structure behind what you do.

The term “meme” (rhymes with gene) was coined in 1976 by Richard Dawkins, a British evolutionary biologist who posited that cultural ideas — religion, dress codes, haircuts — undergo competition and natural selection similar to genes until winners emerge, the victors then taking over societal acceptance. (You can see this evolution in human rights, if you pan out, as more inclusive laws for voting and access are passed in each societal generation.) Propagating memes is what marketers do — we try to embed a concept (a subcompact SUV, a diet energy drink, an insurance policy with a diminishing deductible, a new AT&T data plan) into the masses of humanity until it becomes a core need, not a nice-to-have option. Advertising is the communications accelerant for memes.

Marketing, of course, has more levers than advertising and does more than spread memes; in its broadest definition, marketing reaches inward in organizations to logistics, operations, and product development, and outward to distribution, sales, and customer service. But marketing’s core function is to connect supply production with market demand, and scaling the idea of the product outward is marketing’s greatest success. Apple, which has become more of a design company than technology or product maker in the past 15 years, has scaled massively as its brand becomes an icon for the future of communications. Apple is now a meme.

One false current debate in advertising circles is whether social media may be replacing old media in spreading memes, largely because the networks of interconnected consumers provide better pathways for scaling ideas. This either-or, Twitter vs. TV dichotomy is a false argument, of course; all channels have some value in pushing messages out, word-of-mouth marketing has always existing, and consumers don’t give a rat’s asterisk about most brand messages. Anyone who does passing research in consumer media consumption quickly finds it is an “and” equation, with people watching 5+ hours of TV a day and spending hours on mobile, the web, and social media, too.

Spreading ideas requires both old push media and new share channels. In simplest terms, there are more marketers trying to push ideas than consumers willing to listen or share them, so for the foreseeable future we will need mass media (TV, radio, outdoor) as well as digital, social and mobile for concepts to reach the market.

Beneath the silliness of saying one medium is better than another for moving ideas lies a more difficult truth: All ideas will stop spreading and will decay across all channels, because the friction of sharing outweighs the velocity of their speed.

The gravity of decay

Now let’s examine why ideas die. Our culture just can’t absorb all the inputs, and when an Old Spice guy or Razor Scooter does go viral, our impatience pushes the fad aside quickly. Back in 2010 the social-media monitoring service Sysomos analyzed 1.2 billion tweets and found most disappear rapidly; only 6% of tweets were retweeted (passed along), and only 1.53% achieved three levels of sharing.

A quick trip to chemistry class illustrates the math of decay. The atoms that make up radioactive material such as uranium are unstable, meaning that their innards (protons and neutrons) gradually shoot out random energy, kicking out a couple of their nucleus number as well. (This is groovy, kids, since changing the nucleus changes the substance. If carbon-14 gets excited and fires off gamma rays, it loses mass and becomes nitrogen-14.)

A batch of radioactive material contains a lot of atoms, of course, so while the timing of any individual atom’s decay is random, the curve of overall “radioactive decay rates” can be predicted. The term “half life” comes from the period of time it takes for any radioactive material to lose half its original value. Like a bad high-school relationship, the decay goes slower the less substance there is left; this happens because, by definition, half of the remaining unstable atoms will decay over period X; then one-half of those remaining atoms decay in the subsequent equal period; and the curve stretches out until an almost flat line. The radioactive relationship is dying, but ever more slowly.

The formula for viral success

While most ideas decay like radioactive isotopes, there is a path for viruses to succeed. The math is very simple.

This is the formula antivirus companies such as Symantic use to model how computer viruses spread over time, and it simply means if the passalong rate is greater than the stop-paying-attention rate, information will grow within a network more than it dies.

Say you tweet something really, really clever. If 1 person passes that 1 message to 1 other person, the path becomes linear … 1 to 1 to 1 … and the message won’t scale to the masses. Your idea will flatline, really going nowhere.

However, If 1 person, on average, passes to 1.1 people, then the message goes viral … 1 to 1.1 to 1.21, growing with every iterative cycle. Just a slight uptick in passalong rate can take you to millions. For instance, if every person passes your message to 1.5 people, after 10 cycles you’ve reached 57 people, after 20 cycles you’ve reached 3,325, and 40 passalong cycles later your message has been read by 11 million people. Increase the passalong rate to 3, and you’d clear the same 11 million people after only 15 sharing levels.

The math works in reverse; if absorption (users who stop sharing) is greater than generation (those who do share), your idea “use” quickly declines.

It’s not easy succeeding with this math, because inertia is against the marketer. The “Law of Large Numbers,” a simple concept from probability theory, declares than in any number of events the average result will converge on the expected value — flip a penny 10 times and 7 may be heads, 3 tails, but flip the same coin 1,000 times and almost 50% will be heads, 50% tails. The average human message-sharing impulse is close to zero, so the native absorption rate is high while regeneration is low.

So the more passalong events you encounter, the more likely your idea is to hit the average of all user apathy, tipping the passalong rate downward. The Law of Large Numbers decrees your idea will likely die.

The importance of network receptivity

Another voguish idea among marketers is to focus on “influencers” — the key hubs in a human network with the greatest number of connections, or influence — to push messages viral. Malcolm Gladwell posited in his book “The Tipping Point” that “people with a particular and rare set of social gifts” can accelerate ideas through a human network.

Yahoo researcher Duncan Watts, a professor of sociology at Columbia, disputed Gladwell’s influence idea by studying retweets among 1.6 million Twitter users. Watts found that while influencers play a moderate role in selecting what messages get pushed forward, the receptivity of the entire human network to the idea was most important.

This makes sense mathematically. The Law of Large Numbers means viral transmission will randomly converge on an expected value, typically less than 1.0 passalong, so most ideas will fade. However, if the entire network is primed to be receptive to an idea — say, U.S. consumers are all scared witless by a sudden near-collapse of the financial system, and one political candidate seems to offer a solution — a fresh meme related to that receptive environment may achieve passalong everywhere greater than 1.0, and thus scale. This is why Obama won the last presidential election.

This is also why social-network interfaces keep changing. For-profit networks such as Twitter, Google and Facebook want to increase their utility to users (and thus audience sizes and ad revenue driven by those eyeballs), so they work hard to make their networks more receptive to ideas being passed through them. This was the impetus for the Facebook “Like” button and Google’s copycat “+1,” all meant to reduce the friction between you and your passalong click.

The network ecosystem matters most, but controlling it is almost impossible. The last big puzzle for marketers is to understand the context of the network environment, and how to make their idea fit.

Finally, achieving viral marketing success is not enough if your idea lasts for only a fleeting moment. Marketers want to make their meme stick. Flash-in-the-pan hits, such as the Skittles-Twitter funniness or Evian’s roller babies, scale rapidly and die quickly. This won’t do.

You don’t want to be a fad. You don’t even want a year of success, such as the Old Spice Man Your Man Could Smell Like boosting sales for 2010 (and winning a well-deserved Grand Effie).

You want to become a religion. You want your idea to achieve escape velocity in which the gravity of disinterest no longer holds it; the concept reaches an unstoppable orbit as the core service, the default product, the status quo.

Think of such ideas — concepts so common that, like the air around us, we forget they exist. Belief in God; the institution of marriage; holding animals indoors as pets; covering our nakedness with clothes; men shaving; women wearing makeup; worthless paper denoted as “money”; the very theory of money itself. The base of all these “memes in stasis” are impulses to please ourselves, ease our fears, or signal our status to others. For some reason, we’ve adopted these ideas as our children.

Marketers would love to send out the meme that becomes the next bedrock of societal behavior; preferably one where they control supply and make a healthy margin off of its continued distribution. It’s a noble goal, one that pushes innovation and higher standards of living. Without such aspirations we wouldn’t have roof shingles, refrigerators, tomatoes or iPads.

Good luck sharing it, marketers. The math is stacked against you.