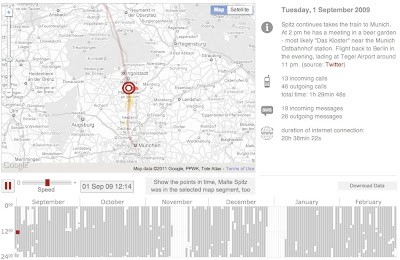 German Green Party politician Malte Spitz is concerned about privacy. So to prove a point, he sued Deutsche Telekom to have them release six months of tracking information collected by his cell phone; Spitz then gave the data to Zeit Online, which made a freakily accurate animated graphic of Spitz’s exact travels over six months. The map shows Spitz as a dot moving from meeting to meeting, stopping to sleep … and by combining the phone data with publicly available information from his tweets and web activity, observers can determine much of what he was thinking and doing throughout each day.

Of course a normal reaction is ZOMG, cell towers are watching us. Once you get past this, the next reaction is to wonder, how could consumers be protected while putting such data to beneficial use?

In marketing, for instance, personalization is something consumers long for (see: the success of Netflix) but something marketers fail miserably at (mainly because each consumer has thousands of different modalities that manifest themselves almost randomly, e.g. you could be a hipster and father and lover and friend and cycling enthusiast and researcher of pharmaceutical meds, all at different times in one day). Truly accurate geolocation tracking, coupled with data feeds that flag or predict your consumption modality, would allow advertising to be tailored to what you really want, when you want it. Such personalization would fill the very basic marketing gap — blindingly obvious, once you think of it — of digital coupons at checkouts tailored to something consumers really want but haven’t purchased yet (as opposed to current couponing in U.S. grocery stores, which offers you discounts on products you already bought after you pay the clerk, doh).

Personalization, perhaps the real play for Color
Tailoring offers at the point of decision remains excruciatingly difficult, which is why marketers have failed to make so-called 1to1 personalization happen. Better tracking systems could finally make personalization possible.

App upstart Color could be a player. Robert Scoble noted this week that Color, the much-ballyhooed and confusingly designed photo app, launched to apparent failure … but has location technology behind it that could make future use more interesting (and worthy of the $41 million VC investment). Scoble wrote, “for instance, when you take a photo [Color] measures the audio profile of the room, captures the compass reading and other sensor readings, and pretty accurately knows other users in the room at the same time.” At face value Color creates a new type of spontaneous social network, useful for sharing pictures with strangers at a rock concert. But imagine deploying Color’s location sensors to reach groups of consumers passing through the mall on Black Friday, parsing which people are leaning to your retail location … and tying that back to past individual consumption histories to predict what they want, with photos of products and associated discounts popping up on their handsets. Unlike the social couponing aspects of Groupon, a geo-location discount from Color would not try to get someone in the door, but rather influence consumers for more sales once they are at the store. The leverage there is exponentially higher.

The data is out there, and businesses are just beginning to learn how to use it. The future of personalization may finally arrive. Of course, that also means not freaking you out with marketers who know when you’ve been sleeping and know when you’re awake.

(It’s worth playing with the cell phone data map here to see the tracking experience yourself.)

One thought on “Beyond ZOMG: cell phone tracking and Color’s new business model”