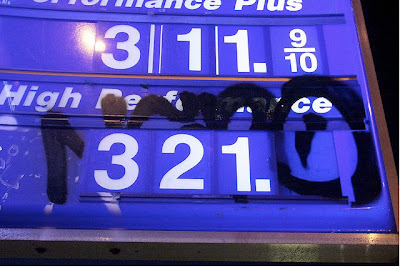 If you wonder why Charlie Sheen went viral almost instantly to millions, consider the more blasé case of rising gas prices. Humans, you see, when facing uncertainty about oil rigs or riled celebrities, react like a giant massive brain making a snap decision.

Let’s start with oil. There is no apparent reason why a disaster on an oil rig or sudden revolution in the Middle East would make the price of gasoline spike today at your corner station. After all, that gas was produced weeks ago, when the price of oil was lower — so why does it suddenly shoot up 50 cents today based on news that won’t affect future production until next month?

Ah, but that’s where the giant human hive mind kicks in. Economists call it “storage arbitrage,” and here is how it works. Say the guy at the gas station was planning to sell his gasoline for $3.00 a gallon — but suddenly he believes it will shoot up to $3.50 soon. It would make no sense to sell it now, so he plans to hoard it a week or so until the price reaches $3.50. But everyone else, in a game-theory standoff, tries to do the same thing — so suddenly, instantly, there is a gas shortage, causing a scramble in demand as consumers try to find pumps that will sell, until the price magically settles on the future, higher price of $3.50 — today, not next week. As economist Hal Varian once noted,

“That is the price necessary to induce those who have gasoline to sell it now rather than to wait till next week. This argument does not depend on whether you think the gasoline market is a paragon of perfect competition or an evil oligopoly. All it requires is that you believe that people who own gasoline, like just about everybody with something to sell, prefer to receive a higher price rather than a lower price.”
Which brings us back to Charlie Sheen. Information about culture, say, gossip about celebrities, is a commodity that has value. When new news breaks, that bit of information is more valuable because consumers are hungry for it. Even if you wanted to withhold the tidbid, your competitors (tuned into a supply from The National Enquirer or People magazine) have the same information, and the rush of demand causes everyone to tip the news into the stream. The value of gossip, of course, is not pegged to a dollar amount but rather a currency of social relevance, and that currency spikes suddenly, instantly in value to sate the market.

Oil commodities, gasoline prices and celebrity gossip tend to be wildly volatile, because everyone has cars and everyone loves to hear the latest snarky news. Price spikes, like viral memes, tend to fade eventually, however. Someday even Sheen will run out of gas.

One thought on “Explaining Charlie Sheen and spiking gas prices”