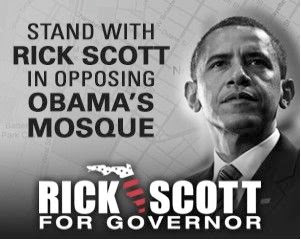 Tis the season of negative advertising. Rick Scott, a Republican running for governor of Florida, is posting ads asking you to stand up to fight Obama’s … mosque. Confused? We mean, just two years ago Obama belonged to a radical Christian church. No matter. It’s a classic depositioning move, casting a seed of doubt not meant to lure the logical but to sway only 5% or so of the population both (a) on the fence about whom to vote for and (b) angry about the idea of another religion building a house of worship in New York City.

Negative ads work because they tap our deep-rooted, evolutionary fears. It’s the same impulse that makes you retreat from a spider or snake, potentially poisonous in the tropical lands of your ancestors, who were smart enough to flee and pass those fearful genes downward to you. We cringe before the strange, the foreign, the unknown that might hurt us. You can’t fight aversion. Fear is hard-wired to survival, because even if unjustified 99% of the time, the 1% that protects you from being bitten is enough for your DNA to survive.

Expect to see more fearmongering this fall as politicians warn us of snakes and spiders all around. If only a few percentage points step back from suspicious half-truths, those who cast doubts win the game.