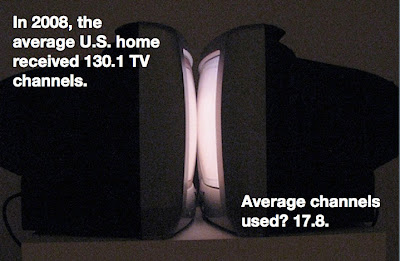 Here’s a brain-teaser: Today, is there more or less ad inventory in the world than 10 years ago?

The puzzling answer, we suggest, is yes to both. Like the Schrödinger’s cat physics thought experiment, marketers live in a paradoxical universe in which there is both more and less space to send a message to consumers.

First, why more? Because consumers now consume more media than ever before. The New York Times reported today that the typical U.S. resident watches three times as much media now as they did in 1960, taking in 12 hours of content each day including 40 web sites on average. Behind this time-use tidal wave is an ocean of material, thousands of cable channels, hundreds of thousands of apps and millions of web sites that allow consumers to find anything they want. This expanding universe of content has created an almost limitless inventory for ad placement — one reason why CPMs are falling as advertisers learn to target consumers via ad networks (online collections of thousands of web sites) or ad exchanges (online bid systems that help marketers reach specific target audiences).

But second, why less? Because consumers are paying less attention to intrusive media than in years past. You see, advertising impressions don’t really exist unless they reach a consumer’s mind. Dig into each media arena, and the data shows consumers blocking marketers everywhere.

Television: Did you know channel surfing no longer exists? The typical U.S. home receives 130 TV channels but dials in to fewer than 18 — because consumers now click on guide menus and scroll down to “tune” to the exact channels they want. Yes, according to the Nielsen / Ball State University March 2009 study of 376 participants directly observed over 48 hours with media exposure logged at 10-second increments (whoa), U.S. consumers still watch 5 hours and 9 minutes of live television a day — but concurrent media use, or watching more than one device at the same time, is the biggest media trend. When commercials air, eyeballs go to the computer or smartphone in the lap.

Radio: Arbitron’s expansion of Portable People Meters, which measure radio usage via an actual electronic signal vs. the older, less effective diary panels, has found that consumers tend to rapidly change the dial when :30 second spots come on.

Online: Consumers change viewing windows on computer screens about 37 times an hour — clicking away from any content that doesn’t immediately meet their needs. The falling click-through rates for banner advertising, once above 4% in the 1990s and now below 0.08%, are the surest indication that consumer attention to marketing messages online is fading.

Mobile: And the world of mobile apps, launched by Apple’s iPhone, allows you to tap a single button to find a sports score or weather report, ignoring the old world of advertising inventory altogether. Mobile advertising has been perhaps the most disappointing arena for marketers, with missed forecasts for each year in the past decade. Wall Street analyst Mary Meeker has noted that we’ll soon live in a world of 10 billion mobile Internet-connected devices, and most of those will not use the old browser portals that enable standard advertising inventory. As consumers migrate to content-specific applications with traffic alerts on car dashboards and weather advisories in umbrella handles, mobile advertisers will face a continued squeeze in ad inventory.

The great paradox of our age is that consumers, floating in a sea of advertising inventory, are finding ways to ignore most marketing messages by controlling what they watch, spending more time in content creation, and sharing only what they find relevant. For brand marketers this means the cost of placing ads against your specific targets is now cheaper than ever before; the question is, are those inexpensive impressions really making any impression at all?

We’ll be discussing this issue at DigiDay Target this Wednesday in New York City with Dave Smith of Mediasmith, Tariq Muhammad Walker of AOL Black Voices, Mark Zagorski of eXelate, Jeff Hirsch of AudienceScience, and Omar Tawakol of BlueKai.