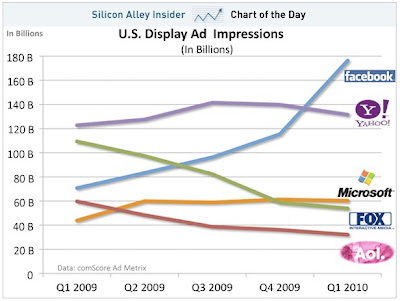 “Facebook Just Blew Away the Competition in Display Ads!” bellows Business Insider. Yes! Ah, hyperbole and the agents of change who follow it. You’d think Facebook is crushing Yahoo and Google with ad revenue from that headline, right?

Um, no. Here’s a calculus secret — and we know you flunked math in high school which is why you went into advertising, so we’ll type slowly here — advertising impressions don’t exist. Impressions are really a currency by which media planners judge options on where to place ad investments. Take Facebook. Social media site users refresh their streams constantly; unlike a reader pouring over NYTimes.com, an FB newsfeeder is clicking again and again, looking for the latest old girlfriends or Bejeweled update. Silicon Alley Insider suggests Facebook has a run rate of 720 billion display ad impressions a year, which works out to 1,800 per user. If you’re a heavy Facebook user, one of the top 10% who really check the site, given a 10-to-1 skew in usage (math, sorry) you may receive 18,000 display ads pitched at you annually.

How many of those Facebook display ads do you recall?

Can you name five?

Right-O. In our agency’s client work, Facebook ads can perform brilliantly if purchased on a cost per click basis — meaning you only pay if someone sees the ad, likes it and clicks through to learn more — but fail miserably when evaluated on impressions. Click-through rates, a good apples-to-apples proxy indicator of whether users are interested in an ad offer, average 0.02% on Facebook vs. the 0.08% average of banner ads in the U.S. Do the math (sorry, sore point) and Facebook users are one-quarter as likely to actually see the banner image in the back of their retina vs. those other colorful boxes at the top of NYTimes.com. Or, (more math) Silicon Alley Insider estimates Facebook made $700 million back in 2009, about $2 per user at the time. Given 720 billion annual display “impressions,” that equals (yes, math, but wait for it!) $0.001 revenue per ad served.

We know. OK. Can you name just one Facebook display ad?