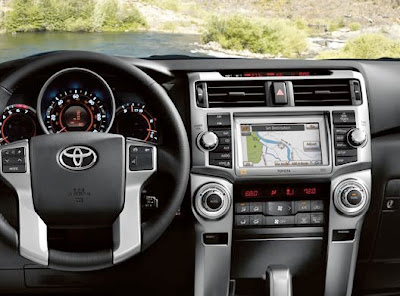 To understand the future of the web, look at the dashboard of this 2010 Toyota 4Runner. It’s sweet. Studly. And it has an old, outmoded GPS system.

For years the 4Runner has been one of Consumer Reports’ top-rated SUVs, so when Toyota redesigned it recently manly men were intrigued. It has strong lines, influenced by the blocky FJ Cruiser, and some clever improvements such as an overhead console allowing quick tweaks to 4-wheel-drive traction.

And this is the challenge of the modern Internet. The 4Runner has an old GPS model with a flat 2-D map that shows your pinpoint crawling across it. No 3-D images of the roads looming ahead such as you’ll find in modern $100 units from TomTom or free from Google on a Droid cell phone. This little design problem is endemic across all auto brands, even among the upscale BMWs and Jaguars, because automakers fill their production pipelines years in advance of a car getting to market. When this car was actually sketched back in say 2006, the GPS system was state of the art. Now, in 2010, we have a brand new SUV with technology years behind the curve.

We call this web appliancification — or the constant improvements in devices that plug into global information systems. The Internet was once a vast wilderness that could only be accessed with a specialized device called a “web browser,” but now it’s turning into an information electrical grid, where you can plug in any device and it will work in a device-specific way. Josh Bernoff over at Ad Age calls it the “Splinternet” and suggests that after a golden age of 15 years in which we all used one window to get online, we’re now approaching an era with splinters of connectivity working on gadgets that have incompatible formats. This is true both from a hardware perspective — cell phones, smart phones, tablets, laptops, netbooks, GPS units, and web-based appliances — and in content ecosystems.

The ecosystem battle is most interesting because this is where the big money lies — including the billions of dollars in advertising spent each year chasing ecosystem audiences. The Apple iPad doesn’t play Flash video formats, because Steve Jobs wants you to buy video through his iTunes store — an ecosystem for music and now books and film. The Kindle is tied into Amazon’s competing ecosystem. Hulu wants to own TV viewers, Twitter your future connections, Facebook your past friends, Netflix your film entertainment, Google your commercial searches, Microsoft your work tools, Rupert Murdoch your paid news. In essence, the 1990s “portal” strategy in which content producers fought to find ways to lock in their customers is back, alive and well.

This pressure of micronetworks vying to control your online life has created a new brand rush of content positioning. Why has Google launched a cell phone? Because it wants to lock in audiences in the emerging mobile channel. Consumers have only so many modes — entertainment, news, work, friends. There can only be a few leaders for each modality. The challenge for marketers is as devices continue to shift, our connections to these new online portals mutate quickly too. It’s very hard to maintain market leadership in an information ecosystem when the gadgets that hold the keys keep transforming. The risk for your business is no matter how solid your product, like Toyota, your information appeal to consumers may get left on the road behind.

One thought on “Web appliancification: Why new cars have old GPS”