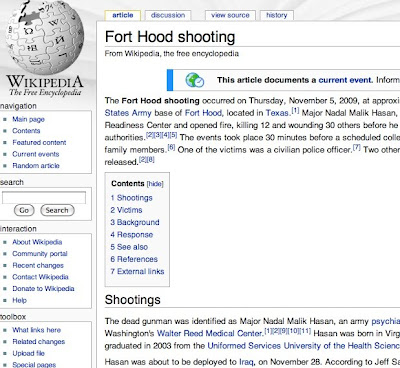 Crowdsourcing has gotten so much press this year that it’s easy to dismiss as a fad: you know, like Six Sigma leanness, 1to1 personalization, CRM customer management, it’s a clever term that simply recasts common dynamics of efficiency or connectedness. The skeptic thinks: It’s just a ploy by agencies for new buzz. The cynic agrees: Humans hunger for frameworks to understand the world because there is too much data coming in for anyone to digest without filters, and so when something slightly new seems to be happening — social media! augmented reality! — we produce new names and imagine, by our own novel sounds, that the rules of gravity have changed.

But what if crowdsourcing is real?
What if humans, like ants or bees, are finally communicating in networks that produce a new form of hive mind? At 1:30 p.m. today, Nov. 5, a shooter struck the ranks of Fort Hood, Texas. By this evening, six hours later, Wikipedia had published a detailed analysis of the mass murder from a historical perspective tied to 22 published references. An army of volunteers had rushed to the online encyclopedia to post, for free, an evolving, informed, objective record of the events.