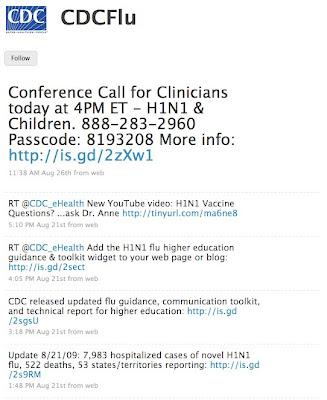 One of the remarkable things about Twitter is how versatile 140 characters can be. When Jack Dorsey held the first brainstorming meeting at Odeo, where Twitter was born, he suggested calling the service “Stat.us” for updating a small group of friends. No one thought it would turn into a mass networking communication system.

Now the U.S. Centers for Disease Control has adopted Twitter as a personal, AP-wire-style news feed for updates on the Swine Flu. But the CDC Twitter stream goes beyond wire reports; it provides behind-the-scenes access to how health professionals are fighting the H1N1 virus, including links to planning conference calls if you wish to listen in and downloadable messaging to help cascade the flu-fighting message. It’s going to be a difficult flu season; the vaccine isn’t quite ready yet, and Americans who wish to get inoculated will need three total shots, one for the regular seasonal flu and two more to keep the pigs at bay. The feed is a good reminder, and taking Americans behind the curtain to show how health leaders are developing plans to fight an outbreak is a nice touch.

Disclosure: the CDC is a past client. Mediassociates is not affiliated with this Twitter program. We update you on their flu effort both for the marketing angle and as a public service.