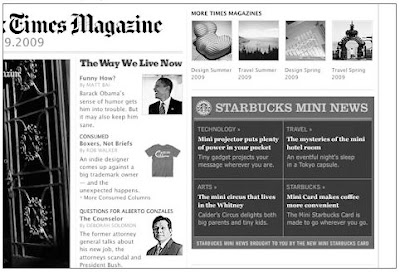 Speaking of Starbucks, it pepped up debate over at The New York Times with a new online ad format that could confuse readers. The editorial content of nytimes.com/magazine surrounds an ad box marked Starbucks Mini News, which includes three editorial articles with links to real NYT content and one article that is an ad for Starbucks, but isn’t marked an ad. If the box-within-a-box seems tricky, well, that’s the point.

Advertorial has been around for a century, but one reason it works is it is always marked clearly an ad, so that readers know where the material is coming from. The problem we see as media planners with blurring the lines of editorial church and advertising state is that confused readers may click, but they won’t necessarily convert. Even if one-off campaigns succeed in getting results for the advertiser in question, the overall devaluation of the editorial copy and advertising clarity doesn’t help readership circulation or advertiser results in the long run.

Clarity of source is important, because it helps readers decide which path they want to take. If you plan to court consumers with advertising, we recommend an honest marriage. If you, as a marketer, don’t think you need to worry about tricking people into picking up your message, we refer you to the history of the telemarketing industry.

Hat tip to NYT editor Patrick LaForge for an insightful debate on this via Twitter.

One thought on “What if editorial and advertorial had a baby?”