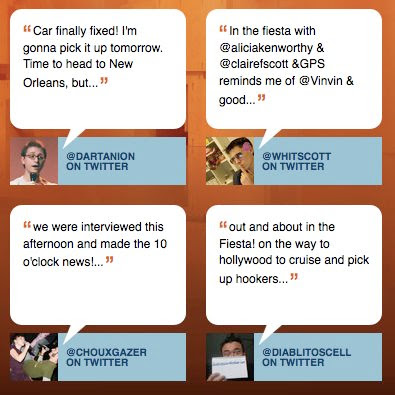 The Ford Fiesta is the American auto success you’ve never heard of. This tiny car is built abroad in places such as Brazil and India, has sold more than 12 million units worldwide since 1976, and its diesel version gets a whopping 65 miles to the gallon. But demand for so-called “supermini” cars has been lackluster in the U.S., up until now.

So Ford is launching the car in the States with a social-media buzz campaign. Ford has enlisted 100 “agents” for an extended six-month test drive, who can tweet, blog, or post photos about their rides. As we’ve noted in the past, marketers are recruiting consumers to promote products by buying their reviews in social media, and this often creates conflicts of interest … in which readers are uncertain how sincere, or what the source of, a communication is. The issue is controversial in ad circles, and even Google has weighed in, demanding that paid posts include no-follow tags to keep the quasi-ad-material off search engines.

Ford avoids the greasy, buying-your-mind feel of many paid campaigns by doing several things right. Users can write what they want (Diablito Damian jokes he’s using the car to pick up prostitutes). The car rentals are tied to several “mission” competitions unrelated to payment — have a graffiti artist paint a wall in your house — that resonate in the young target demo, and are staged to help continue the buzz about the campaign. And test drives are aggregated in almost a Consumer Reports-vibe portal.

On the spectrum of paid posts, between cash-for-shilling and access-for-reviews, Ford strikes a balance that’s more informational than promotional. The debate on paying for opinions isn’t going away, and the approach may become less useful as the social media streams become crowded with promotions. For now, driving to find hookers feels right.

One thought on “Despite the hookers, Ford gets paid posts right”