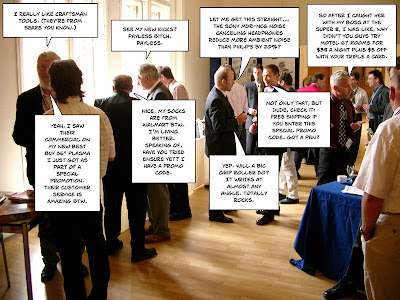 If I pay you to insert a brand into your conversation with your friends and it makes you feel good, is that OK?

The ethical quandaries of pay-per-post continue this month with Intel’s feel-good outreach to Federated Media bloggers. Maggie Mason, author of the blog Mighty Girl, attracts more than 20,000 unique visitors each month, not a shabby audience. So when she developed a life list of 100 things she wants to do before she dies (hopefully many decades from now), Intel agreed to pick up the tab for 10 of them. Maggie is now delighted, headed for Puerto Rico to swim with bioluminescent plankton. Intel has woven the blogger gifts into its broader Sponsors of Tomorrow campaign, a rebranding effort by agency Venables Bell & Partners of San Francisco to move the chip maker beyond commodity status.

We love the repositioning but still pause over the paid posts. A value exchange is occurring but it is not labeled advertising, and instead has become embedded in the author’s content — a gray area of confusion. As we’ve noted before, Google has declared paid posts off limits for its search engines, requiring bloggers who write such stuff to include “no follow tags” so that such links won’t gum up search engine results, or risk having their page rank removed. For bloggers who seek fame, losing page rank is a big eraser. For those who ponder the ethics of accepting payment to write opinions, it is interesting that Google — the world’s largest search engine and one of its biggest ad channels — has deemed paid posts as worthless content.

Tragedy of the commons

Some in the blogging world, such as Chris Brogan whom we’ve debated here and here, wonder why ad industry types take issue with paid posts at all. “We disclose,” these bloggers say, “isn’t that enough?” The answer is no: advertising, like any communication, requires a healthy ecosystem for it to function, and the rising quantities of paid mentions are beginning to pollute social networks. We’ve seen this before. Telesales almost killed the telephone as a marketing tool due to overuse, spurring the Do Not Call rebellion. Email spam has become so prevalent that filters now block it out, depressing legitimate email ad efforts, with an added benefit that your important work email may get blocked from a recipient by accident. The radio network Clear Channel once ran so many ads per hour that it was forced to retrench, after some in the industry worried the clutter would depress ratings and harm advertiser results. Advertising is like any green commons: put too many cows in the field, and you end up with a dust bowl tragedy.

Going too far in commerce is nothing new; admire your local strip mall for evidence of that. What’s different with today’s paid posts is they are buying opinions, not ad space. When the voice of a blogger talks highly of a brand, you now must filter the message carefully to decide whether to believe the thought. Is the opinion an authentic 10 or a shilling 0? Or is it somewhere on the sliding scale in-between? Perhaps paid posts are lovely if you’re the one taking a trip; we wonder if they will be as much fun when the entire voyage of life becomes one series of cleverly inserted brand mentions.

3 thoughts on “Next in paid posts, Intel sponsors your life”