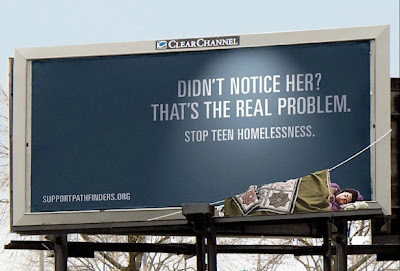 Sure, internet makes headlines. So why doesn’t anyone talk about billboards, the second-fastest growing ad medium in the United States?

Outdoor advertising has leapt from 0.6% of all ad spending back in 1996 to 2.4% in 2007. About $7 billion is spent annually in the U.S. on billboard or so-called out-of-home ads, half that of magazine ads or two-thirds of internet ads. The irony is outdoor, one of the few bright spots of the ad recession, often gets a bad rap among marketing elitists who fail to recognize the reality that most Americans are trapped in cars for 25 minutes a day, staring dolefully at giant signs by the side of the road. Occasionally Ad Age mentions the award-winners, such as this piece above by agency Serve for the organization Pathfinders (which achieved a 30% lift in funding and inundated local police with 911 calls about kids sleeping on billboards). But agency or marketing execs typically disdain outdoor; one told us years ago, “billboards are what we do when we have money left over.”

Too bad, because outdoor works well for many products or services whose consumers have high modality. This is the psychological state of apathy interruptus, when you don’t think about something very much until suddenly you do — insurance, banks, Realtors, a new car. It’s impossible to tell when an individual will enter the 7% of the population about to buy a new home this year, but if you sell rugs or heating oil, you want to reach those consumers right when they get to that decision point. Direct mail or TV might hit a few by chance. Outdoor puts you there, in front of that entire 7%.

Part of billboards’ funky rap is their own fault, because the creative is so often awful. Local businesses often grab a board to try to convince consumers to turn off a highway exit, so homespun, multiple-font bastardizations that would make Edward Tufte groan are commonplace. Rare is the elegant Mini Cooper S whimsy. And the industry has recently alienated some in the ad world with its Wild West approach to pricing the new digital signs (say, huge electronic billboards that rotate messages, where the pricing for one slot out of six is the same as that for a single regular billboard — yet most drivers passing by won’t see the digital ad).

We recommend you don’t focus on formats or creative, but start with your customer. Do they have high modality (thinking about your service only rarely, and then suddenly)? Does your product have mass appeal, but only to the masses when they reach a critical point of interest? If so, then outdoor could be your thing. To see how some marketers do it well, visit the creative library at industry group OAAA.