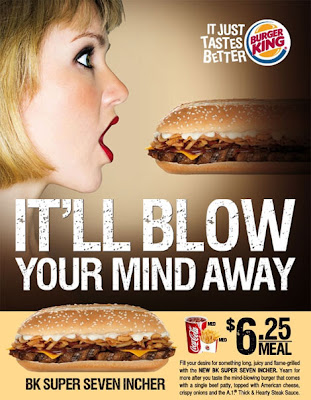 Yes, this is a real ad by Burger King, and its sexual imagery has pundits screaming foul. Slate calls it shameless, Gawker calls it desperation, and even Alex Bogusky, head of Burger King’s U.S. agency Crispin Porter + Bogusky, took time to tweet that his shop didn’t do this job. Turns out the ad was created by a separate team and is running over in Singapore.

As rude as many find this, it also resonates. Burger King mentions on Twitter more than tripled Wednesday, mainly among the influential marketing and advertising crowd. Blogs everywhere are chatting up the campaign — and the sandwich will certainly stick in your mind. Sex and violence have been used in advertising for decades to break through to consumers’ memories; other work for Burger King uses the creepy King figure rubbing women’s backs on the beach to tingle your mind somewhere between hunger, lust and fear. Psychologists know that human memory is heightened in times of emotional stress; freaking out people makes a lasting impression. Shock enough and Ad Age and Entertainment Weekly give you a call.

We call this a backchannel buzz strategy, where the creative is designed to startle viewers and also build scandal across other media. You’re seeing more of this lately because the internet makes it possible; web sites and social media don’t have broadcast standards, so shocking materials can spread like fire there even if seen or mentioned only briefly on CNN or The New York Times. Run a horrid ad once, cross the line, take it down — yet it will reverberate for weeks online, and if you’re lucky go viral to millions.

One thought on “Burger King: Why unsettling ads work”