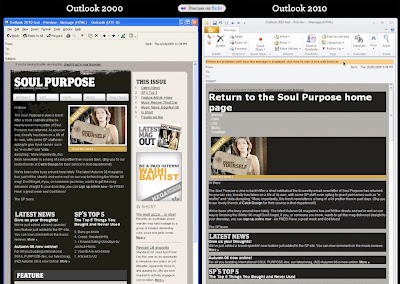 Back in the old days, say 2007, if a huge corporation changed a product and you didn’t like it, your options were few: call to complain; write a letter or email to the company president; play your contacts in the press and hope that someone picks up the story.

Times have changed. When Microsoft announced that the 2010 version of its flagship email product Outlook will not render web pages correctly, but instead use Word as a “render engine” to give a strange, squashed version of HTML email inserts such as e-newsletters, users went up in arms. A group started a viral campaign using Twitter and the web site Fixoutlook.org to demand Microsoft rethink its strategy.

Microsoft actually made this change already in the 2007 version of Outlook. Prior to that, email newsletters appeared in Outlook laid out exactly like a web page (above left) while the 2007-onward versions of Outlook squished things inside Microsoft Word (above right). The issue will mostly affect marketers who push professionally designed emails into recipients’ In boxes, and could conceivably reduce email newsletter response rates — one of the few remaining bright spots in internet banner advertising CTRs.

User complaints are spreading: The top 10 ad blog Brandflakes led with the headline “Windows users: Another 5 years of crappy email?” and the topic is beginning to trend in Twitter. Microsoft has responded to the campaign noting its Word editor lets users create graphic-rich emails without HTML.

We can only guess at Microsoft’s motive: by entangling email tightly with its PC-based Word software program, it defends the Windows mothership against the rapid movement of users to other online, free, “cloud” communication options.

Unlike back in 2007, Twitter and social media have gotten a giant’s attention. Right or wrong? Look at the choices above and you be the judge.