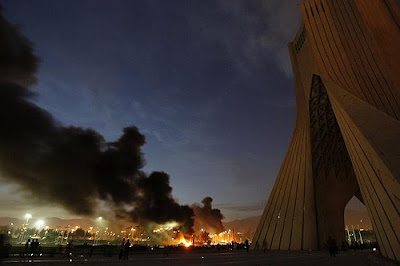 More than 20,000 people marched in the streets, blocking roads, waving flags, decrying the corruption that has pushed another quarter million from their homes, with rumors swirling about genocide.

We’re talking, of course, about the Tamil conflict in Sri Lanka.

Tamil? Sri Lanka? Not even on your radar? That’s OK — most Americans don’t follow international politics at all. So you have to wonder why one international tragedy causes nary a ripple in the United States while another, the current Iranian election angst, has affluent Americans turning their Twitter headshots green in solidarity. This statement doesn’t make light of either dispute but simply notes that some messages go wild while others wallow in the back pages of dry newspapers.

Iran is a case study in why some topics go viral

The Iranian elections caught CNN by surprise a week ago when Twitter lit up with complaints the news network was not covering the riots. To be fair to CNN, most Americans usually don’t give a hoot about international politics. Between 60,000 and 100,000 civilians were killed in the Darfur genocide, yet few in the U.S. can name the continent Darfur resides upon.

By comparison, over the past seven days discussions of Iran have escalated in social media; by Saturday, June 20, “Iran” was included in 3 percent of all tweets. The controversy has struck a chord, perhaps because Americans are fresh off an emotional election and are projecting their Obama passions (he’s a savior / he is destroying democracy) onto a very foreign election. Perhaps the thought of anyone gaming an election irritates us, when our own country just had such fervent debates about our next leader (a fresh hope / friend of terrorists). Perhaps U.S. social media users were secretly flattered at the thought of their favorite new tool, Twitter, being used to circumvent draconian censorship (although The New York Times reports Twitter use in Iran was marginal compared to other, less sexy technology such as text messaging).

It’s all a case study in the Gladwell Tipping Point power of context — for any message to go viral, not only must it be resonate and reach network influencers, but the network itself has to be primed and ready. Humans propagate messages best when their communication ecosystem is staged, like dry grass waiting for the spark that causes wildfire.

Our thoughts go out to those struggling to find truth in Iran. The answers are neither simple nor easy. It’s very interesting, though, to find out suddenly that Americans care. For some reason, unlike CNN, our networks were ready.

Photo: From the Flickr collection of Faramarz Hashemi, who is sharing graphic images of the current conflict in Iran.