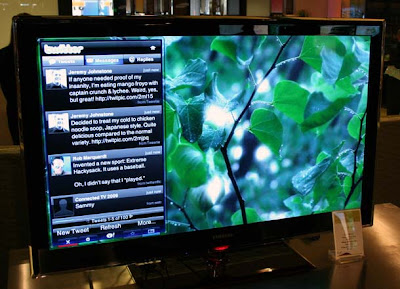 TVs are getting smarter, and while we’re cautious about dropping $2,000 on a big box that may have outdated technology in 2 years, we like the looks of Samsung’s new sets — which include widget apps that run things like Twitter. Samsung says that by summer it will include Netflix and Amazon apps as well, allowing users to download HD movies.

Cable companies aren’t taking this disintermediation lying down, though. Canoe, a venture of six of the largest U.S. cable operators, announced that within 6 weeks it will launch so-called “addressable advertising,” or the ability for one national advertiser to run different spots on TV sets at the same time in different parts of the country. The initial cut is a little rough — the first “Community Addressable Messaging” initiative would allow two creative 30-second spots to run, one reaching 42 million homes and the other 18 million. Eventually Canoe plans to enable customizable TV spots into every home that uses cable. There’s also a nice data collection play here, too — since Canoe could track exactly how many people see the different versions of each spot.

Which would be great, except some consumers may now skip cable to download films from Netflix or Amazon directly.