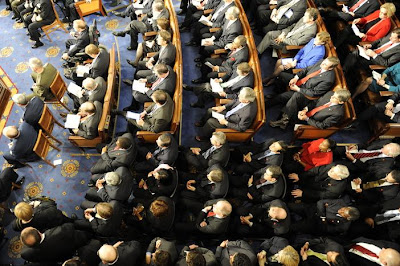 As President Obama took the podium last night, members of Congress did more than listen. They started tweeting on their Blackberries, sharing text messages 140 characters at a time.

“One doesn’t want to sound snarky, but it is nice not to see Cheney up there,” typed Democratic Rep. Earl Blumenauer of Oregon. Republican Rep. John Culberson of Texas went further, broadcasting video live from his camera phone. It’s all reported in a brilliant column by Washington Post columnist Dana Milbank, who writes:

“Some members called it a new age of transparency, a bold new frontier in democracy. But to view the hodgepodge of text messages sent from the House floor during the speech, it seemed as if Obama were presiding over a support group for adults with attention-deficit disorder.”

Call it the new duality of consumer media consumption. Even as we participate in live events, we feel compelled to contribute, and new social media broadcast tools make it simple to carry on side conversations. The impact for marketers is both positive and negative. Pro, disseminators can listen in to instant feedback on what people think digesting the message. Con, your audience may tune out. Heck, the President can’t even capture their undivided attention.