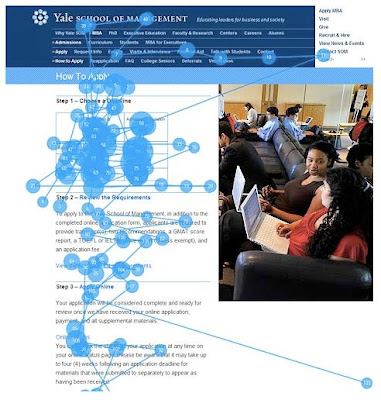 Web usability god Jakob Nielsen, whose own website looks like junk until you realize he’s cleverly pulling you in, has posted results from eye-tracking studies that show what not to do with photos on your website. Guess what? Purely decorative, big, splashy images don’t do a thing for users, who move their eyes around them. Specific images carrying information, say, photos of your executive team or detailed shots of products that people are actually seeking, score big. Nielsen concludes, “Sadly, many websites are still more obsessed with showing off than with getting to the point.” So go on, get to your point. 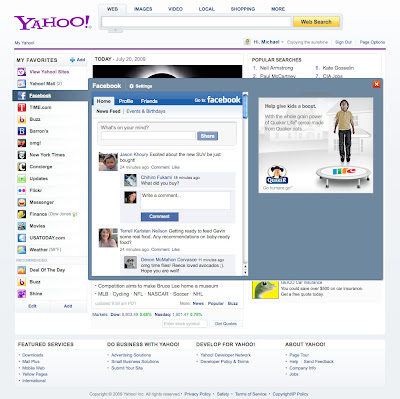 Yahoo.com is perched atop a dangerous peak. Today it is huge, attracting 26% of all global Internet users. But Yahoo traffic is sliding according to Alexa and Quantcast, down 1.6% in the past 3 months and about 10% in the past 2 years — evidence of the movement of consumers away from single site portals to the long tail of web sites, blogs, social media and mobile.

So Yahoo is trying to get stickier. It’s about to relaunch with pop-up-style windows allowing you to update social networks such as Facebook or MySpace while still within Yahoo. Analyst Jeremiah Owyang and WSJ reporter Kara Swisher agree the inclusion of social media is a needed improvement.

So why should a site with 120 million monthly visitors worry? Yahoo itself notes in its most recent annual report that mobile and social media fragmentation threaten any portal:

“The number of individuals who access the Internet through devices other than a PC, such as mobile telephones, personal digital assistants, smart phones, hand held computers, televisions, and set-top box devices, has increased dramatically, and the trend is likely to continue. Our services were originally designed for rich, graphical environments such as those available on the desktop and PC. The lower resolution, functionality, and memory associated with alternative devices currently available may make the use of our services through such devices difficult, and the versions of our services developed for these devices may not be compelling to users, manufacturers, or distributors of alternative devices…”

The Yahoo redesign could work. The fastest growing segments in social media are now adults 35+, a more conservative group that might be happy playing inside a Yahoo’d-everything portal. Since wealth is accumulated with age, this is not unattractive for advertisers. The relaunch will certainly boost ad revenue in the near term via banners next to the new pop-ups for Facebook and MySpace (social media users tend to refresh often; think of all those CPMs sucking in advertising cash).

Still, the portal strategy is growing outdated. There are nearly 4 billion people with cell phones now, and as those phones get smarter with hundreds of apps, new doorways online will continue to open. The Yahoo response feels a bit like inviting your teenage children to hold a party in your basement; they may spend more time at home now, but eventually the kids will move out. 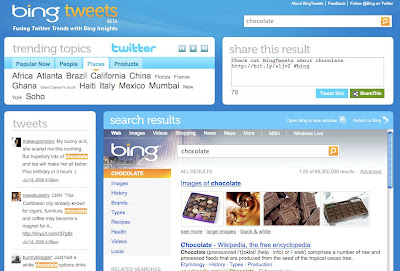 The Bing rollout since June 3 has been a masterstroke of finesse. After years of Vista fumbles that culminated with Jerry Seinfeld making a TV spot even he looked uncomfortable in, Microsoft rebuilt its Google competitor into a sophisticated search engine with elegant design, user competitions, celebrity trending, and a customer service presence on Twitter. Punch in “the answer to life the universe and everything” and Bing will respond “42,” showing Redmond has a sense of humor.

So now Bing has melded with Twitter in a new BingTweets microsite, most useful for tracking urgent updates about chocolate, and one has to wonder — when did Microsoft get so light on its feet?

Sure, there was juice behind this. A massive $100 million ad campaign helped Microsoft boost its share of the search market from 7.8% in May to 8.5% in June. But perhaps the most intriguing finding is that focus groups show users spending 150% more time viewing ads at the top of Bing search results; if Microsoft can maintain that once the novelty wears off, advertisers on Bing could see a lift. Bing has combined design usability with a fragmented, multipronged presence on the web.

The lesson for marketers is if you still have only one static web site, tweaked every 12 months after debates with the Planning Committee, you are missing out on how people use the internet. Conversations, microsites, segmentation, hub-and-spoke points of entry, search, even dedicated human response … you need many online doorways to attract many different viewers. Even Bing needed a few Bings.

The idea was sweet but not sticky. The little colored candy Skittles launched a new home page today in which the regular site turned into a Twitter page, filled with all the references from the social network related to, you bet, Skittles. Tens of thousands of Twitter users began tweeting each other, “hey, did you see the Skittles’ site?” And then their very text messages floated to the top of the “Skittles” web page. By early morning 0.9% of every 100,000 messages on Twitter included a mention of the candy.

Ah, but look at the downslope on the chart above — faster than a sugar crash, the mentions began declining. Which makes us wonder if all this SEO link-baiting on the internet echo chamber, in which new schemes emerge to tempt people to talk about or link to a product, are really sustainable. Hershey’s, we love you, but this game has now been played.

Update 2: We checked back on Day 2, and yes, Skittles’ tweets had a sugar crash…

But as Dirk Singer notes, even 1 percent of a large number is a very large number. David Armano also shares a deep dive on the entire interactive strategy. 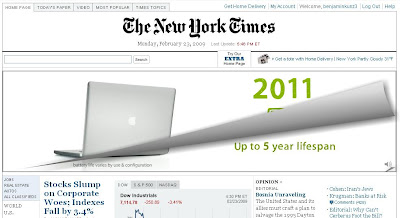 The New York Times revised its web site today to make room for a new ad format that takes up one-third of the visual real estate. First up, Apple, with big sound, crayonish animation and flipping pages. We asked our colleague Jim Knipper, an internet display guru, for the technical term. “That’s called a big-ass ad,” Jim said.

The trend continues NYT’s stretch to sell more of its sacred news space — back on Jan. 5 NYT sold ads on the cover of its print paper for the first time. We’re conflicted. From a media buy, the new, large, beautiful formats are sure to get noticed. But as a news consumer, the only next step we see in making these ads more intrusive is if they give us electric shocks as we sit in front of our keyboard or flip through the paper. As news organizations lose traffic and ad revenue to the web, and then within the web lose even more to the long tail of niche web sites and consumer-generated content, they must try new tricks to keep advertisers engaged.

So bully for you, Apple. Now where did we put that news? 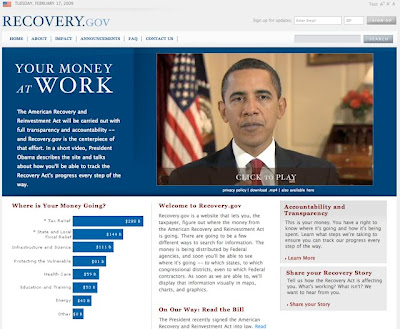 Liberals will love it. Conservatives will hate it. Advertisers will have heart attacks.

Tomorrow The New York Times technology section and WSJ.com will be reviewing the new Recovery.gov web site, which launched today to showcase how the stimulus funds are being used to perform CPR on our economy. It has some nice touches: Omnipresent web video, registration for email updates, chance to share your personal stories, a timeline of activities. MSNBC will run a puff piece and Rush Limbaugh will have histrionics.

But the real story is advertisers are scared, because Recovery.gov is one more illustration of how large and complex organizations (such as the federal government) are bypassing traditional media sources (CNN and Fox News) to speak directly to the public. And when big players talk to small consumers directly, the old model of third-party interception with advertising gets pushed aside. The issues driving this are manifold:

+ Low-cost mass media — the White House can set up a web site anyone can access for a few thousand dollars.
+ Almost-perfect access to scheduling — news of new information sources travels extremely fluidly, so consumers know almost instantly that a major new source (Recovery.gov) has launched without reading TV Guide.
+ A plethora of free media platforms — YouTube, Twitter, Blogger — give enterprises of any size free video and text publishing tools to set up their own transmissions.
+ Growing consumer comfort in finding, sharing, and adding to source material — perhaps the biggest trend of the past 5 years is people yearning to participate directly in how information is shared.

It’s a lovely move, watching people become more creative with more access to more programming. Except it is squeezing the financial sources that make it all possible. With nary an advertiser in sight.

Apparently Benjamin Netanyahu, who is running for prime minister of Israel, likes the Obama web site. A lot.

Via You Thought We Wouldn’t Notice and Dirk Singer. 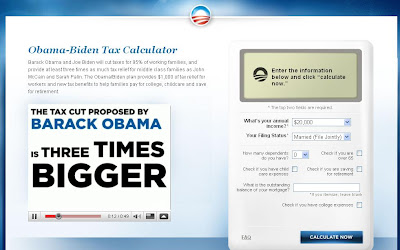 One of our first English teachers in high school said “show, don’t tell.” Obama is doing just this with a tax-cut calculator promoted on his main web site that allows U.S. voters to determine exactly how much they’d save under his tax plan vs. McCain’s. Nice use of numbers to try to overcome political arguments, and perhaps an approach your own business should emulate online if you’re selling anything in a down economy.

We couldn’t find a similar calculator on McCain’s site but did find videos outlining his own economic policy benefits with the vibe of a business presentation. Different audiences, different tactics. 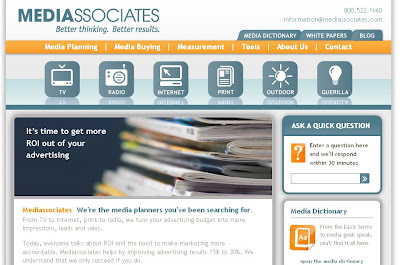 We redesigned our agency web site and man, it wasn’t easy, because agency people all have IQs of 134 and so have to battle fiercely about who is right or wrong … um, something like that. Thankfully we got to work with Rob Biddiscombe at the Plaid interactive shop, who fielded 2,034 silly requests and through it all kept the site focused on the core mission: Attract more business.

And we realized. Greatness doesn’t come from groups. Greatness comes from leaders like Rob.

Here’s why. Close your eyes and imagine you’re going out to see a film with a friend. You have one conversation between you, and you can each decide yes or no on which picture you want to see. That one connection makes four choices — no/no, no/yes, yes/no, or yes/yes. Picking a film is relatively easy, but you had to work through four decision outcomes to get there.

The more people you add to a group, the more complex the decision process becomes — because connections between all those people grow exponentially. This is why committees often fail. Here’s what a small group of five people look like: 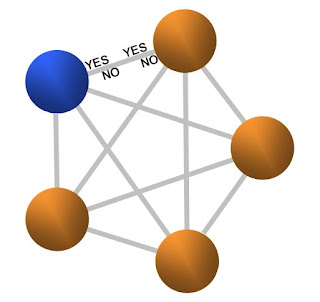 Yep. Five people create 10 real connections, and since each connection has 4 possible yes/no outcomes, there are 40 potential decision points before any final outcome. Groups of people are complex, writes Clay Shirky in his new book Here Comes Everybody, and he’s right. Expand a group to 15 members and you get 105 connections and 420 yes/no potential outcomes. Even moderately sized groups create unimaginable decision points to reach a final consensus.

Shirky notes that this morass is why organizations such as the military, corporations or a church typically build command-and-control structures. But there is a big problem emerging as social media makes it easier for organizations to “be flat.” If you rely on consensus from everyone before taking action, you may never get anywhere.

So next time you’re fed up in a big team bureaucracy, or exasperated by an email debate among virtual colleagues, here’s what we suggest. Nominate two people to get it done. Set the expectation. Then set those two people free to go do it.

You’ll like what you get, and if you’re lucky, one of those leaders will be a guy named Rob.