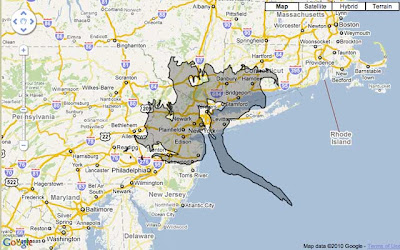 There’s a saying that all news is local, and if it ain’t local, it’s not the news. So we’ve been watching the public anxiety over the BP oil spill begin to wane as it, far away from most Americans, drifts off the urgent news cycle. If the slick were overlaid on New York City, we’d still be talking — angry, perhaps, at pollution stretching from mid-New Jersey to central Connecticut — but the Gulf is so distant. Larry King has moved on to cover Lady Gaga; NPR is shifting gears to politics and the Middle East; a public consumed with the latest viral fads begins to yawn at the prospect of more of the same news dripping from the ocean through August.

The problem goes deeper that ocean pollution, as troubling as that may be. Communication is escalating into faster streams of massive information sets. IBM researcher Martin Wattenberg told Wired a year ago that the biggest problem facing society today isn’t storing exabytes (1,000,000,000,000,000,000 bytes, about 21 of which equal all monthly Internet traffic) or zettabytes (1,000,000,000,000,000,000,000 bytes, 42 of which would store all human words ever spoken aloud), but simply learning how to understand big data. We’re awash in news and advertisements and public opinions. The human need to filter out noise, to make some sense of the world, could be why polarizing outlets such as MSNBC and FoxNews are ascendant — as we all listen in only to self-reinforcing views of the world, cocooned in our little flattering bubbles. When information creation and storage reach the point of cacophonous clamoring, humans may tune out altogether. Geography used to keep us apart, to forge new cultures and languages and to ignore disasters far away at sea. Now, with knowledge passing all borders, the only way to stay sane may be to forget pollution altogether. 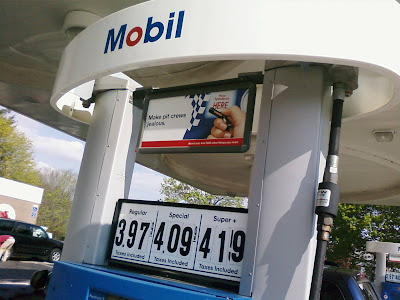 $4.19 a gallon. Today, in central Connecticut. We actually turned our SUV around, pulled over, snapped this photo — and realized, like that little corn we ignored on a foot until it struck a deep nerve, man, we have a problem.

You see, we Americans are an insular lot. Most of us couldn’t name four countries in Africa if you paid us (Egypt is in Africa, true or false?), yet the news rumblings are starting to get through. Costco is rationing rice; James Kunstler predicts peak oil will end suburban sprawl; The Economist says another 100 million people will tip into absolute poverty due to food shortages this year. When the price of bread and milk and, yes, gasoline goes through the roof, we get it.

And that means design will change.

Not design in a trivial sense; not layouts or brands or women’s clothing. We mean the design of how people live. Kunstler explains better than us that as oil supplies are tapped out, all the cheap habits based on petroleum will be squeezed away — long commutes, big-box stores filled with oranges from California, even the plastics that create the keypad on the computer in front of you.

Which means people will need new designs to structure how they live. Some marketers are ahead of the curve on this. BP rebranded beautifully a few years back as “Beyond Petroleum.” Honda has launched a hydrogen-powered car prototype that could be fueled from a home power station, circumventing the need for hydrogen gas stations on every city corner.

If your business isn’t thinking 10 years out on the designs that people will clamor for in a world of diminished energy, you are going to miss the boat.

It all reminds us of a trip to Italy years ago. We, as Americans, couldn’t believe how small the cars seemed, how elegant the shoes and phones and food; heck, ice cream had less sugar and pasta less salt. We eventually acclimated to the lean culture only to return to the States and be stunned again by the apparent bloat of American consumers — walking around in sweat pants and sneakers, drinking from oversized coffee sippy cups. For two days it was like being at recess.

But American habits are changing. The iPhone is an elegant handheld computer. The Mini Cooper has won raves for its sporty handling. People are investing in home theaters instead of going out, learning how to cook again in remodeled kitchens. McDonald’s and cinemas have responded by adding wood paneling, to say, look, we can be streamlined, too.

When gasoline hits $5 and then $6, lean will be the aesthetic of choice. The designers, like Honda, who have proven they can think ahead in new markets will be the first to capture emerging demand.

So look at new markets. Start designing lean things. Watch out for outsiders with brains who are evaluating your own industry. Because our bet is Apple will not only do music and video; soon they will be rethinking your car.

Republicans and Democrats, put down your spears and consider this: Today the U.N. panel on climate change released its most dire report on the impact of carbon emissions, predicting a 6 degree increase in average world temperatures by 2030. Al Gore in his Nobel Opus documentary claimed ocean levels might rise 20 feet; this report says 40, enough to drown 2037 Manhattan like 2005 New Orleans.

It doesn’t matter if this prediction is right or wrong, or if it affronts or validates your personal beliefs, or how clever the WSJ editorial board will be in its retort Monday morning. What you better believe is that marketers around the world are jumping on the green bandwagon as consumers begin to really worry about the future due to melting ice caps. Green messaging will be here to stay. We’ve written before about brilliant campaigns to rebrand companies, such as BP’s beyond petroleum mission. Global warming may make us slightly warmer or destroy the planet. We don’t know. But the idea of it is equivalent to disruptive technology. Marketers ignore this idea at their peril, because competitors are repositioning “green” as you pause. 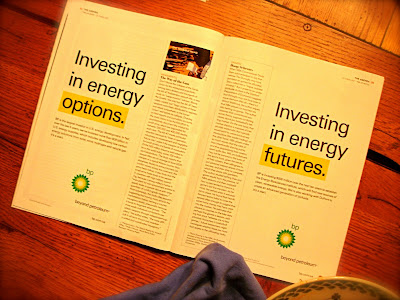 It’s been seven years since BP launched a $200 million rebranding campaign with Ogilvy to turn the world’s 3rd largest oil concern into “Beyond Petroleum,” an eco-friendy, consumer-listening, solar-powered investor that is much more than an oil company. As you’d expect, such claims from an oil behemoth — founded in 1998 by the merger of British Petroleum and Amoco — were met with some derision at first. But BP took a green-and-gold sun as its logo, quickly won PRWeek’s “campaign of the year,” and now — seven years later — the campaign is still going strong.

We think it’s brilliant. Here’s why.

1. BP’s media plan and creative are unwavering. Over 86 months, we’ve seen the same logo, the same brand position, the same yellow highlighted text, the same targeting of higher income consumers (think “investors”) in magazines such as The Atlantic. BP is consistent. It tells the world it is more than oil; it is the friendly environment + future energy. Think about the frequency of impressions. After seven years, you can’t help but begin to believe some of it.

2. BP’s advertising covers every angle. Gas stations in the U.S. were modernized with the green and gold. The very gasoline itself was rebranded, with the middle-grade gas now called “Silver” at BP stations. From the road, the point of sale is inviting, challenging Mobil’s convenience stores-Speedpass-and-clean-bathrooms for busy travelers. 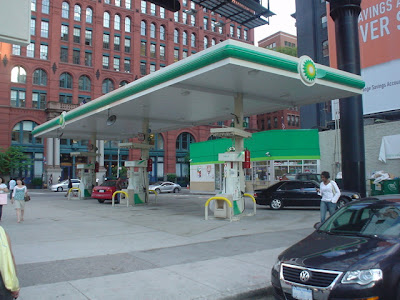 3. It’s ballsy. Come on. Changing the very name from British Petroleum — which sounds aspirational to the U.S. consumers who admire the uppercrust UK — to Beyond Petroleum. Doing so left its core product, oil, behind. Imagine selling that idea to YOUR board.

4. This is so looooong term. The world of oil energy is changing. Heating oil manufacturers in the U.S. are just beginning to toy with 5% grades of bio-diesel, and here in 2001 we have the third-biggest oil conglomerate walking away from its core to focus on solar power and clean energy. Now in 2007, with Al Gore in the news, investors looking toward the Northwest Passage, and Russia planting a flag on the seabed of the North Pole to stake a claim on ocean rights when the ice up there is gone, BP got a jump on the others by recognizing the long-term trend in the market. We need more energy, and we’re looking ahead. And now, we Americans can still feel good about oil.

BP, BP. How could you be so smart?