We were fortunate to interview a few bright minds at SXSW Interactive this year. Brian Morrissey is one such light, who as digital editor of Adweek has to sort through claims to seek the truth in emerging technologies. So we asked Brian: “Dude. How do you cut through all the hype?”

Stay tuned for more SXSW interviews this week with myself and Humongo hipster Darryl Ohrt. Vids will be cross posted at Brandflakes for Breakfast. 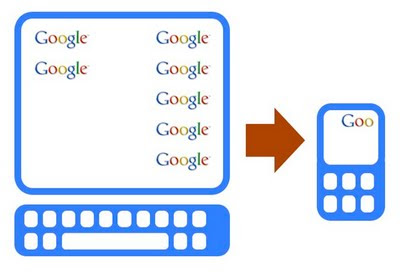 Übertechnologist Bob Cringely suggests mobile phones are leaping ahead of personal computers and will inevitably become the dominating communication platform on the planet. (He also says digital displays will someday float before our eyeballs, but let’s not go too far just yet).

That could be bad news for advertisers. If you want proof, let’s look at the silly history of predictions for mobile advertising:

14. 6. 3. You get it. The reality is mobile spend was $160 million in 2008 and may top $900 million in 2009, solid growth but still far, far from the inflated expectations. The analysts who make money with hyperbole keep stroking it, even if they reduce their forecasts every six months. Mobile advertising has turned into the Great Pumpkin of the advertising industry, a powerful apparition who never quite appears on time.

Yes, the devices are proliferating — there are now 4 billion cell phones on the planet vs. just over 1 billion personal computers, and the technology of mobile is leaping ahead faster than PCs. Cringely notes that manufacturers of computers, such as Apple and Dell, push major improvements every year and a half and “most of us are unwilling to be more than two generations behind, so we get a new desktop or notebook every 36 months.” Mobile devices, on the other hand, cycle through design improvements in less than a year, and consumers typically upgrade them every 18 months. This dynamic of consumers buying new mobile toys twice as fast as computers keeps interest focused on them. Mobile also fits into the peripatetic lifestyles of the majority of the world’s workers who don’t sit all day behind desks.

Yet advertisers continue to trail behind. The problem is both diminished advertising inventory and fragmented ad media. Inventory is tighter because mobile screens contain 90% less visual space than PC screens; inventory is fragmented because smartphones hold thousands of single-tap apps to get online. (We call this the Google Visual Inventory problem and detailed it in BusinessWeek here.) Add the dynamic of mobile users having less patience to be interrupted on their tiny screens as they try to communicate with friends, and ad space inside mobile doesn’t look pretty.

Despite all the fanfare about mobile, we think there’s a reason mobile ad dollars have not yet taken off. Yes, mobile advertising can enable pinpoint targeting, geographic proximity to a retail location, just-in-time marketing, augmented reality to overlay your current visuals. Groovy. But all that targeting has a tradeoff of much less space, and thus fewer ad dollars in the market. Mobile could become the most efficient form of advertising yet … the problem with efficiency, though, is it tends to push older inefficient supply out of the way.

Google, arguably the world’s biggest advertising network, is not taking the threat lying down; its Android OS operating system is not an off-strategy stretch but rather an attempt to build a new mobile ecosystem to house Google advertising. Google also purchased mobile ad leader AdMob for $750 million in stock this month. Google wants in.

We’re sure Google will make it; question is how much. Mobile is a small box and a lot of ads just won’t fit. God help us if consumers ever move to digital eyeball displays.