We’re on a plane today bound for California so will leave you with this roadtrip campaign by our friends at interactive shop Plaid. They’re touring middle America to see what brands and agencies are doing on the cutting edge of social media.

Above, Plaid interviews Scott Monty, head of Ford’s social media program. Scott just passed the Year 1 mark at Ford in the role, and we’re sure it wasn’t always easy — don’t miss his post on the bumps and successes along the way. Critics might see it all as just another PR move, but we think Scott is forging something different — an outreach program that moves beyond the brand. We’ve seen Scott congratulate competitors for winning awards, get back to people on Sundays, and rail on the silliness of stupid marketers. Scott is making Ford seem human.

And that’s just one stop. You can follow Plaid’s two-week journey at PlaidNation.com.

(Full disclosure: Plaid invited us to guest post at their Top 100 blog Brandflakes for Breakfast while they’re out playing. We may not give the keys back.) 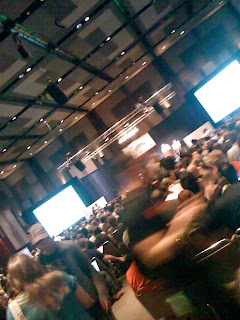 So we got home tonight from SXSW Interactive, the web-internet marketing festival, having learned a few things. Facebook is emulating the Twitter live “stream” (to become the Experian prospect database of the now). Mobile advertising still doesn’t exist in any scalable form (but like the Great Pumpkin may be just around the corner). Quants can predict outcomes of baseball and elections but not stock movements (because too many public companies lie). The psychology of game play can guide better design (in web sites, product usability, and marketing campaigns).

But the real finding is the web is now merging with reality.

This is both a good and bad thing. Bad, in that people no longer pay attention. The geeks (OK, and us) spent much time ignoring elite speakers to type their own commentary on iPhones or laptops into Twitter, with hashtags (brief codes beginning with an “#” symbol) allowing others to search for the backchannel snark. Everyone justified this as a new way of adding personal value to the presentations, but face it, if you’re typing you can’t listen, or at least listen well. 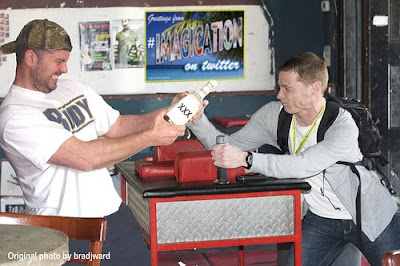 The good spin, though, is sometimes the backchannel created a powerful overlay on reality — real insights from your peers on the current debate; the contact who finds you in a room of 1,000 people after you text your shirt color; the location of the person you need to meet on the roof of the Mashable party. We think Todd Sanders did it best — this Wisconsin-based webmaster couldn’t make SXSW, so had friends email him photos with vacant areas allowing him to be photoshopped in. The entire series is hilarious, bordering on art masterworks. Here, Todd arm-wrestles Plaid interactive agency president Darryl Ohrt over a booze bottle, when Darryl was actually holding nothing. Soon numerous people were staging photo shoots to feed Todd; uberblogger Chris Brogan posed with his arms around air; Todd became a meme within the SXSW hip crowd, who in turn looked for his next photoshopped feed back.

It’s scary people don’t listen. It’s cool that ideas, moving from the virtual web community into reality, give us new things to listen to.

A good wrap by interactive branding shop Plaid on the week’s events in advertising. We’re beat so we’ll let them cover it. Happy Friday, Flakes. 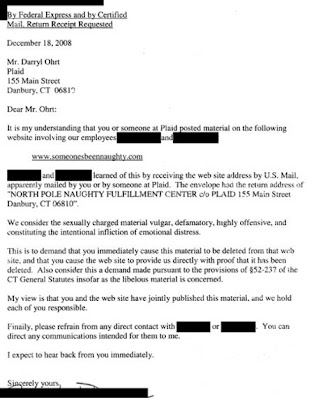 Scott Monty over at Ford shared a laugh. A leader at another organization called a lawyer. Which business would you rather brag about?

Our final holiday story revolves around Plaid, a Connecticut brand shop that created a mock video for Christmas in which you can insert anyone’s name into a “news report” that they’re having, ahem, scandalous intimacy with Santa or Mrs. Claus. Completely over the top. And completely safe for work — no nudity, no vulgarity, a few uses of the word “sex” as you’d find on the evening news. When Monty got the link at Ford, he forwarded the humor on to 6,600+ people who follow his thoughts on Twitter.

Unfortunately another organization who got the link, unlike Ford, didn’t get the joke. They sent Darryl Ohrt, principal of Plaid, a nasty note hinting that the online art was defamation. (We look forward to hearing of the alleged material damages to a person’s reputation resulting from a rumor that one slept with Santa Claus.)

The real story is not about appropriateness or monitoring employees’ use of the internet … but about the brand implications on both organizations. Ford comes off like a hip company that has a bit of fun (and we’re sure Ford has plenty of lawyers, too). But this other group, well, feels as grouchy as an HR executive pricked by a physician’s needle.

Is your organization loose enough to share a laugh with employees and customers? Or is your brand heart two sizes too small?

The interactive branding agency Plaid is once again going nuts, packing their leading designers into a rented Avis van and driving 2,246 kilometers from Vancouver to San Diego all to meet potential clients with whom they want to work. The video above shows them wrapping up the previous “brand aid tour” in Texas last summer.

Which begs the question — why don’t they just use the phone or internet? Haven’t these people seen gas prices lately? Well, this is an experiment in mobile technology. Plaid, for this second year, is using cameras, GPS, wireless and all forms of social-media broadcasting tools to turn two weeks of work and business development into performance art at www.plaidnation.com.

Last year Plaid’s tour, from New England to Texas, won them several accounts including the gyro-balanced Segway scooter. It is ironic that a shop that made Janet Jackson go viral is now making real-world cold calls; perhaps pressing human flesh will never go away.

We just hope this year they don’t place the cameras low on the van floor pointed upward at female account execs. Just saying.

Full disclosure: Plaid sent us a T-shirt. We’ve had beer together. We hired them to design our agency web site. Darryl could use some nice dress shoes.

So last Christmas we bought a high-end digital camcorder that is gradually collecting dust as we try to decipher how to convert and edit the video. And our friends over at Plaid have a simple $150 Flip camera that, well, actually makes it easy to record life. Like their agency creatives chucking pumpkins off a roof (we heard they were really, really angry at a client).

This points out two trends in technology — on one end, we get higher orders of complexity, of computer operating systems such as Vista that do everything but don’t quite work, of bloated software, 1,000 cable channels, BMW iDrives, overwhelming us with choice. On the other, we get simple tools downstream, like the camera on your cell phone that you actually use, or the sweet little Twitter that suddenly connects you to the world. 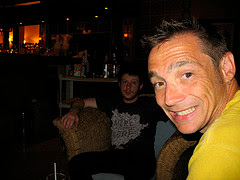 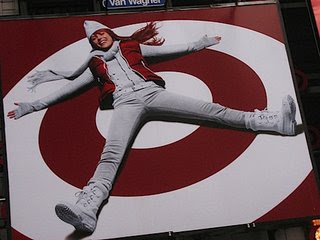 We refer you to Brandflakes today. Über-blogger Darryl Ohrt is on fire taking down silly marketing and PR departments who fail with social media. Like the goofy response from Target to a blogger who complained that the above photo may be, um, controversial. 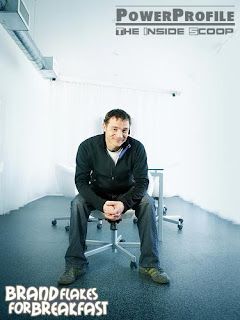 This week we traveled to Washington, D.C. with Plaid, presenting a hard-math and uber-creative advertising proposal for a potential client. We’re pumped.

Plaid is the creative yin to Mediassociates’ number-driven yang. Or, since yin is earth (reality) and yang is heaven (head in clouds), it probably goes the other way. No matter. Plaid is led by Darryl Ohrt, above, a Top 150 marketing blogger who just got interviewed by Inc. Magazine about the future of social media. Darryl is one of these brilliant guys who can take any business challenge, rotate it 90 degrees, turn it inside out, show you the path to results from an entirely new angle, and then fire off creative so good that it makes you gasp. We think Darryl designed the gold-foil-coupon-chocolate-bar concept for Willy Wonka, and we write really nice things about Plaid because they secretly control the internet. Congrats, Darryl, on the upcoming Inc. piece.

Does Inc. know you used to look like this?

After D.C., we planned Mediassociates’ growth for next year. Our largest financial services client announced major expansion plans for 2008, and we’re stoked. We helped new friends at Maya plan Hispanic marketing for several federal agencies. We spoke with a brilliant author and found out Babe Ruth had a little secret. We’re finalizing our upcoming web relaunch and designed an interactive tool that will allow advertisers to forecast ROI from changes in their media mix. And we got stuck drinking beer in a snowstorm. It happens.

Oh, and we’re hiring, so if you know a brilliant assistant media buyer with expertise in broadcast, contact us here. Mediassociates is growing fast, we make advertising strategy fun, and we don’t have NYC traffic.