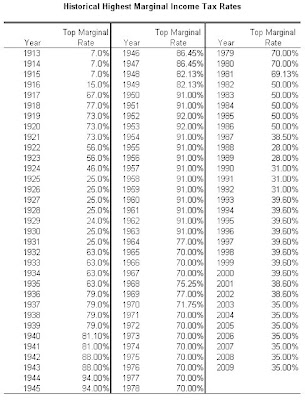 Americans pay far too much in taxes, to hear today’s protesters tell it, and the “Tea Party” rallies against the tax code being held across the U.S. show how simple messaging can resonate. Simple, but perhaps not accurate. The table above shows the history of highest marginal tax rates in the U.S., which peaked at 94% in 1945, fell to 70% under Nixon, 50% under Reagan, 39.6% under Clinton, and 35% under Bush. President Obama has hinted he would return tax rates to the Clinton-era level, a movement that many on the right now call socialism but by historical standards is still a bully good deal.

This isn’t to say who is right or wrong; we’d love to pay zero in taxes ourselves, if only schools and fire departments and highways could be built out of rain from the sky. The Tea Party concept is brilliant because it simplifies the message, evokes America’s history, and makes protesting sound like a bit of fun. If you want to build a movement, don’t talk details or history — instead, create a catchy name. Don’t miss Rick Santelli’s original CNBC tea-party rant that started it all.