Occasionally you read an insight so bright it hurts because you hadn’t seen it first yourself. That’s how we felt today reading Bill Green’s riff that the Super Bowl ads all failed because not one was as good as “1984” — the Apple TV spot that introduced the world to the Macintosh computer.

That spot was perfect. It was directed by Ridley Scott, fresh off of Blade Runner, and so shook the world when it aired in the third quarter 25 years ago that it was replayed on the evening news. “Can you believe what Apple did? It called IBM Big Brother!”

So here we are, now in that big-screen future, and we get spots about racing cars and aliens pushing TV and guys crunching chips so loudly that girls’ clothes fly off. Bill lists nine total reasons why all these ads pale next to “1984,” and his last is most plaintive: Context. “You relate to an ad based on how your life is going,” Bill says, and if ever there were an opportunity to play savior against a dystopian disastrous environment, this is it. The global economy is melting, ice caps are soon to follow, the aging population is stressing social services, intellectual property rights are being tossed, bailouts may bankrupt our grandchildren, and that’s just the news on page A1.

Maybe that’s why the latest Super Bowl ads fell flat. On the 25th anniversary of “1984,” advertisers missed a golden opportunity to offer a hopeful solution. Maybe Obama took the wind from their sails (the brand position for hope is filled). Maybe, at heart, creatives knew no current product is as inspiring as the original Mac (although we do dig that Audi). Still. Ad industry, it would have been nice if you had tried.

I Believe tells us this Audi A4 spot was conceived by DDB, Barcelona, Spain, and filmed with no computer-generated imagery. Instead, a team of real puppeteers and magicians choreographed a beauteous creation under guidance of clown-priest-juggler Philip Noble. All we can say is … boss, it’s time you sprung for a company car. 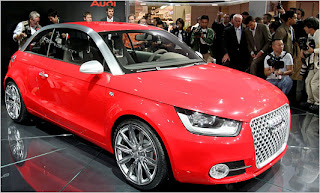 The 40th Tokyo Motor Show once again proves we’re living in the golden age of auto design. Check out the Audi A1 Metroproject Quattro Concept above, a little study for small, urban vehicles — in this case with 191 horses from a turbocharged gas engine AND a 30 kW electric motor. It’s efficient, fast, and if it ever makes it to market, probably affordable in the $27,000 range.

The model began life as the BMW 1600 in 1966, an 85-horsepower two-door sedan that was laughed at in the era of monster Thunderbirds with 345 horsepower. So BMW engineer Alex von Falkenhausen decided to build a “muscle car,” and swapped out the 1600’s engine with a 100-horsepower 2.0 liter to create the 2002tii. The car came in 1970s glare such as lime green and bright orange, had flat vinyl seats, and the steering wheel was cheap plastic. Back in the early 1970s, this was state-of-the-art technology, and because the little car could (barely) top 100 mph, Germans nicknamed it the Flsternde Bombe, or “whispering bomb.” The sheet metal looked like it was cut and bent by hand. 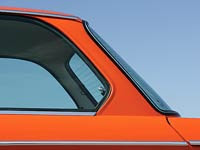 Which brings us back to Tokyo. The emerging cars give us twice the acceleration, double the mileage, and incredible designs. Computer technology has democraticized good taste. It’s funny to look back and think of BMW once trying to catch up to Detroit on design and torque. Now, if only the U.S. could catch Japan, China and Europe in terms of our gas mileage.

This means (a) people are skipping TV commercials, (b) advertisers need HeadOn! topical headache medicine, and (c) Audi is fighting back! Audi released two kindacool commercials that are sped up, with the idea you have to slow them down with your DVR remote to fully enjoy them.

And then the story gets strange. Perhaps worried most consumers can barely find the remote, Audi released the clip above on YouTube to explain how to slow down commercials with your DVR remote.

OK, we know 1 in 5 homes has a DVR and this commercial-skipping thing is going to get worse. But sending your customers to the web to YouTube to find your instruction video to get instructions to record your commercial on a DVR and then use the remote at a later date to stop, rewind, and slow down the commercial is giving me a headache. Methinks an ad agency somewhere thinks too much. HeadOn! HeadOn!