Sydney-based futurist Mark Pesce offers a mind-spinning take on mobile networks in this presentation at the Personal Democracy Forum in NYC. The upshot: social media is not tech toys and texting phones, but instead a revolution in human consciousness.

1. There is always a lag between the emergence of technology and humans discovering how to use it. The printing press was invented in the 1400s, centuries before it led to liberty. The internet emerged in the mid-1990s and we are just now leveraging its network and platform. Our human bodies themselves have had the technology — muscles, big brains and opposable thumbs — to build cities for 3,000 generations, but it took a while for our mental software to know what to do. When technology arrives, the outcome is always delayed and usually unexpected.

2. The next big wave is the mobile phone, and this new tool will once again shift human culture. Half the world’s population now has cell phones, and by 2011, 5 billion people will be able to communicate anywhere by voice, video or text. This doesn’t mean people will play with iPhones. It means human minds will finally have a group connectivity to act as giant, viral pieces of software.

3. The new hyper-connected human software leads to a world where groups, not individuals, are empowered. And this is where the futurism gets trippy. Most Westerners view democracy, or at least liberty, as the highest plane of social existence, where capital, labor and people can move at will. But Mark suggests the new networked world of humanity will make groups rise up with their own collective incentives and consciousness, even if those are at odds with individuals or the governments individuals have voted for.

Mobile communications will become the ultimate lever for small groups to move the world. The question is whether that will be for good or evil, and how in the world anyone can stop this genie now that it is out of the bottle. 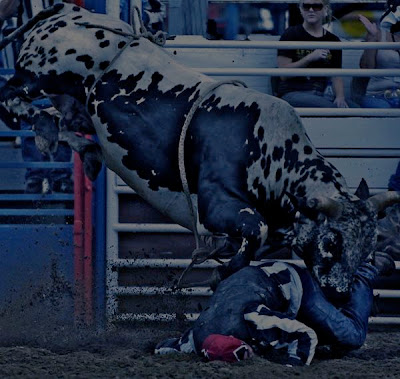 One way that social media has turned traditional communications upside down is that individual people, not media properties, have become the “brands” for news dissemination. Vincent Maling gives us a Hemingway-esque report on human rights abuses at prison rodeos:

“The bull effortlessly throws most of them over its shoulders, goring the unlucky ones in the process. In the end, it’s a more direct approach that wins the day: one inmate manages to snatch the chit after leaping onto the bull’s head. He’s jettisoned into the air, but that’s a small price to pay for the “glory” that is his victory.

The whole thing feels like an inbred, country-fried version of Spartacus. The winner of the final game even tosses his hard-earned chit up to the prison warden, who sits in a special box overlooking the whole violent spectacle alongside his wife and daughter.”

When you find a good blog, such as Michelle Mart’s Media Artist where Vincent guest-wrote the rodeo post, you return again and again to see what you will find. Rodeo abuse is a topic we never would have dreamed of, and perhaps never found given the “objectivity” of traditional media, without the opinions and personal news accounts of blogging. 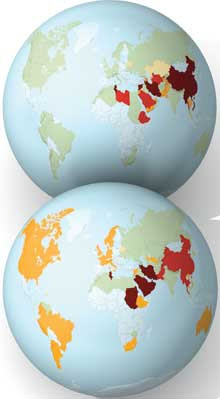 Communications gurus planning campaigns abroad now have an easy test for how problematic the local media market may be in carrying the messaging. Researchers at Cambridge, Harvard, Oxford and the University of Toronto have mapped the filtering of internet content in 41 nations around the world, and found 25 countries either block some topics completely or screen it.

Update: You can find the research at MIT’s online pub, which requires registration and is free.