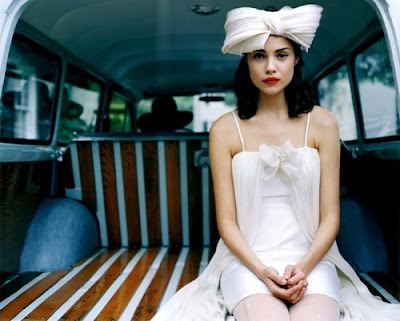 So our brother is getting hitched next year and as we teased his fiancée over Thanksgiving dinner about vegetarianism, Walmart and energy consumption (let’s just say she believes in change), we thought of hope. You know, that crazy belief that if you do something different in the world, something good will follow.

We bring this up because the dour economic news is starting to choke hope in business. Inside marketing and planning circles hope is known as innovation, and the leaders of innovation are starting to falter.

Cutting-edge innovator Tesla, the upstart producer of high-end electric cars, has tapped most of its $150 million of investment and been forced to delay its second sedan model until 2011.

Internet innovator Twitter, the web communication service that proved invaluable during last week’s Mumbai attacks, still attracts $500 million buyout offers but makes some wonder if it can survive the recession while still in a “pre-revenue” stage.

And old-school innovator GE, the largest producer of wind turbines in the U.S. and one of our best hopes that humanity will figure out how to live on alternative energy sources and clean water, has had its stock hammered down to bargain-basement levels.

It’s worrisome because we don’t want to see electric cars, open communications or alternative energy die. Failing to innovate due to a bad economy is a good way to miss future growth. It doesn’t have to cost a lot; PNC Bank is grabbing market share among twentysomethings with a web site that rebrands stodgy banking to a hip “virtual wallet” — complete with a slick interface that forecasts how much money you’ll have next week after your paycheck clears. A little clever code, and PNC is putting on 4,000 new customers a month.

Sure, innovation requires risk. Johann Gutenberg went bankrupt in 1455 after printing 200 bibles … but within 50 years a half-million books and intellectual revolution had followed. Starting something new is like getting married. You don’t know where the road will lead, and you probably can’t afford it, but the act of faith gives birth to the future.

Photo by Rodney Smith via Maximo.


Here’s a confection to start your holidays. Someone is stopping people in the streets to ask, “What do you wish would happen by the end of the day?” Sometimes simply listening to humanity is delightful.

Details on the Crush & Lovely film project are here. Via One Plus Infinity and Swiss Miss.

Next time you hear a solitary voice disagreeing with a huge group of consensus, tell the others to shut up … and listen.

Andy Jukes notes the delicious but bittersweet victory of Peter Schiff, who appeared on various financial networks over the past few years warning that the economy would implode due to the toxic mortgage speculation rotting at its core. Andy writes, here’s this poor guy … correctly predicting the current financial meltdown and all the other “experts” are not just contradicting him, they are smirking, laughing, mocking him!

Schiff’s foes were victims of groupthink, the tendency of people with similar training, education, and ideologies to rush merrily toward a cliff. If you look around a table and everyone is smiling and nodding in unison, perhaps in the same striped suits (corporate) or black T-shirts (agency) or polo shirts with horsy logos (startup) … pinch yourself and ask, what could this group of like-minded folks all be missing?

Yesterday visiting the blog of Shiv Singh, über-strategy dude for Avenue A | Razorfish, we admired a new viral campaign they had launched for Intel’s microprocessor the Core i7. Viral marketing gets a lot of unjustified buzz, frankly because it’s damn hard to pull off, but Singh & Co are seeding their campaign with a contest asking gamers and designers to race each other.

Clever, we thought. Razorfish is stroking the egos of hardcore computer users who view themselves as experts. We’re not gamers or designers, but even we felt the itch to climb aboard this contest and strut. If seeding a viral campaign requires first engaging thousands of key influencers, this might work.

JC Penney strikes a similar chord with a men-are-dogs theme that cracks up any guy who’s bought his spouse an orange juicer machine. (Just sayin’.) The video tossed around the web links back to a microsite Bewareofthedoghouse.com, which in turn has what you expect — funny scenarios of men in hot water, what to do when you’re there, and how to get out. Climbing out, of course, means buying sweet expensive presents from JC Penney.

If you are trying to go viral, the first step is engaging people with relevant content. You can’t reach the masses unless you tempt the first round of contacts to grab your material and launch it through their networks. Egos and guilt are two ways to get noticed. Just whatever you do, don’t get these campaigns confused and buy your wife a hot gaming computer with an Intel i7 processor chip. Trust us — we’ve seen the doghouse.

What if saving your content no longer matters? What if in our rush to embrace new technology for live performance, old stuff is only worth tossing away?

The two biggest trends in tech are moving this way: social networking which connects people and cloud applications that make it easier to create anything. Consider “the cloud” — the push by Google and Microsoft and others to move software from your computer hard drives online, where everything you need for writing or accounting or layout or data backup exists in the ether (and where providers can make money by selling advertising impressions or ongoing subscription fees). It’s all a logical extension of data becoming a commodity, the move of information to the free, where we all access communication utilities via a simple web window and get going.

We dug this idea until DAMMIT! Sunday morning our blog disappeared from its usual online domain www.thoughtgadgets.com. Nothing. More than 900 posts gone. Suddenly we were really p*#&(#d at the cloud. We eventually fixed it, of course, learning the vulnerabilities of anyone who trusts their data online.

And then it hit. Who cares? Saving content is passé. Creation has become the consumer mode of choice. Writing content is now more important than reading it, and those who read want interaction like this brilliant online writing-puzzle-game by blogger Jeremy Freese. (It’s pretty cool; you imagine it’s noon, you have 1,000 words to write for a dissertation, and your girlfriend is about to leave if you blow the deadline.)

Humanity is approaching the pinnacle of attention deficit hyperactivity disorder: We need data to move in faster and we want to contribute out more, until we really can’t listen because we’re too busy doing all the talking. Advertising results are down in newsprint and other traditional media not because of web migration, but because consumers’ modality has changed from reception to creation. Communications may soon be nothing but live acts on stage. If you have the right talent, that may not be a bad thing. 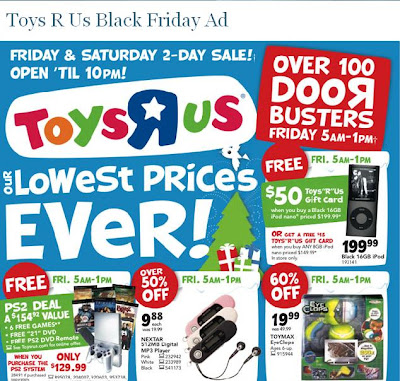 Shopaholics, rejoice! Black-Friday.net gives you a sneak peak at those savory newspaper ads touting GIANT SAVINGS that run the Friday after Thanksgiving. This naughty site leaks the ads far in advance, allowing you to search by retailer to find just what X% off will be tempting you after turkey day.

NPR reports that Black-Friday gets the ads early either from major retailers, such as Walmart, who want to build buzz or from impish printers who scan the ads as they head for the press. With U.S. retailers forecasting a cold Christmas, the sales could be gigantic. This also points out another failing of traditional newsprint in communicating information; why wait for the ad next Friday when you can download it today? Happy shopping. 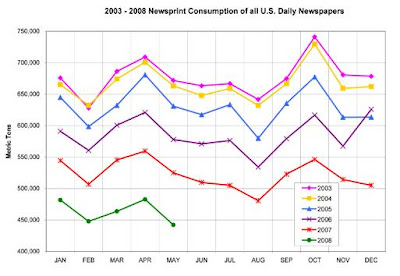 Yikes. The table above from the Newspaper Association of America shows the real story behind newspapers — based on how much newsprint, or raw paper material, they consume each year. Newsprint consumption is down nearly 33% in the past five years. Yes, some papers have reduced sizes to cut costs, but remember that paper size is tied closely to the number of advertisers — so a one-third reduction in newsprint consumption is the clearest sign that advertisers are leaving in droves.

Newspapers can still be effective, but we recommend that clients set up tracking systems such as unique phone numbers in each ad to carefully monitor variances in performance. As the tide goes out on newspapers, you need to watch your investments in this medium very carefully. This media optimization tool shows how rebalancing your print (or other media dollars) can get more yield out of your marketing budget.

Ray Bradbury once wrote that at a certain level technology appears to be magic. Well, now you can magically drop photos or videos on the surface of walls in any video. The brainiacs at Stanford have created a drag-and-drop technology that makes 3-D manipulation easy, a play on those ads behind the ball players in major sports games … and of course are looking at a business model where advertisers pay you, dear consumer, a few bucks to have their logo inserted behind Grandma in the Christmas home movie. The creators call it ZunaVision.

Is reality gone forever? About so. By the way, we can’t recall if Ray Bradbury said that about tech and magic, but since this is our blog we inserted his name anyway.

Via Dirk Singer and AdRants.

We’ve watched this Palin interview twice and still have no idea what the governor is saying — because we’re mesmerized by the turkey having its head chopped off in the background. Seriously. Try to listen without wondering when the dude back there is going to finish his business.

Reminds us of planning meetings where marketing managers carefully craft messages without thought of the context, competitors or market trends.   What else are your customers hearing? Will you make any sense when they look over your shoulder and see something else?