So we tweeted David back, asking how agencies such as Razorfish measure social media results, and he responded he didn’t know. Meanwhile thousands of David’s friends were forwarding the stat around to others online. This is not to poke at David, who is a truly brilliant and generous agency mind and has illustrated the nuances of social networks in ways that might make Edward Tufte blush. Rather, it points out the human fallacy of numbers.

We like numbers. 50% off. Buy 1, get 1 free. Perfect 800 on SAT. You’re a 10. Numbers make us feel good, and if tipped just so — say, $3.99 instead of $4.00 on a mocha latte — we rush to respond. Numbers can even be fake and we take action. Look at the cover of Oprah or Men’s Health or other quasi-entertainment magazines and you’ll see lots of numbers — 99 ways to lose weight, 7 steps to better sex, 3 new brownie recipes. Are 7 steps to sex too much or too little? Doesn’t matter. We’ll buy the magazine, read about it, and then lose weight while eating brownies.

Numbers lie. Yet numbers illuminate the truth about our inner needs. We yearn to predict the future exactly and if you tell us you can, we’ll believe you — at least 87.3% of the time.

Update: David Deal, VP of marketing at Razorfish, wrote us to note the $18.8 million figure was wrong — an error by a panelist who pulled unrelated data and attributed it by mistake to H&R Block. Thanks, David, for the update.

A new Pew study has gotten some buzz over the fact that consumers now view microwaves as more a necessity than television sets. The scary finding for marketers, though, is that most categories of household goods saw a 20-point decline in perception in the past three years as consumers began tightening their belts. You can almost hear the sales of big flat panels screeching to a halt. Marketers of all stripes need to rethink their messaging — because what people needed yesterday is now just a luxurious add-on. 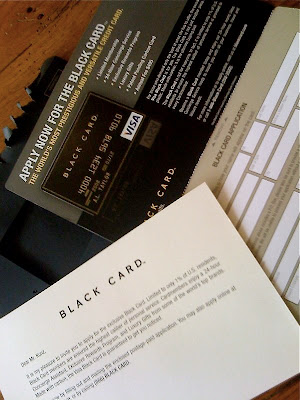 Our first thought after opening the mail to see an invitation to the Visa Black Card of Barclays Bank Delaware was, Wow, a credit card with a $495 annual fee, do these guys know we’re throwing a recession here? After chuckling, we then did the math, and realized a direct-mail piece that cost $0.50 and had even a low 0.25% response rate would attract accounts at a $200 cost per sale — meaning the $495 fee would pay off quickly even if almost no one responds. The Black Card, if you missed it, is Barclays’ slightly downscale version of the black AmEx Centurion Card, a hyper-elite credit tool that allows you to basically buy your own private island. Barclays’ edition comes with a concierge service that can help you find things like rare books, perhaps useful when alone on that island.

If all of this seems pre-economic-apocalypse-bubble-ish, there is an important lesson here: Perhaps your organization, too, should raise your prices. Barclays is simply positioning credit as an elite club, with a compilation of value-added services that might seem expensive to us, but to others is just akin to dropping $500 for a good night out. There’s no harm here; only those willing to pay will reply, and then pay well they will.

This strategy is called price differentiation, charging some customers more for the same basic service — as seen in every airline seat configuration. The guy and lady in first class get a glass of wine and a few extra inches of room, and in exchange for that $5 freebie they pay hundreds of dollars more for the same miraculous transport from NYC to LA.

Price differentiation is extremely efficient. It feels unfair at first, so play this game: Imagine you are trying to sell an old Beatles record. To your wife, it’s worthless; to a collector who realizes it’s a rare edition, it’s worth $5,000. The collector will get much more perceived happiness from it, so if you find him and charge a small fortune, you both get an equitable transaction. In any supply of goods, some value the supply more than others — shouldn’t they pay more for the privilege?

Walk into a grocery store and see this in action. The woman in front of you pulls out a coupon and gets 50 cents off a can of soup. You don’t. You’re busy, you don’t have time to clip coupons, so you value the discount less. You and that lady have just paid two different prices for exactly the same can of soup. The grocery store has optimized its profits by wringing more cash from you than her. And you both feel OK about it.

Charging similar customers differently for nearly the same product or service is a fine way to raise margins. In a perfect world, you might charge each customer a unique price. The trick is to attract the best customers willing to boost your profits without upsetting the masses. We say, try a Visa Black Card. 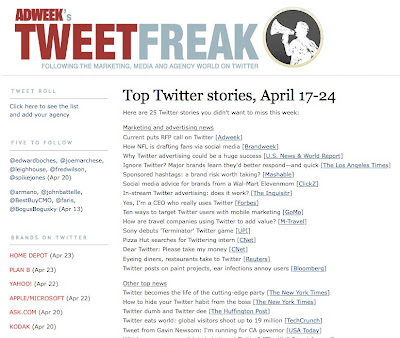 Gary Jules was first to slow down the Tears for Fears song Mad World, years before American Idol. Here Jules shuffles awkwardly up to the mic. A guy with unkempt hair just starts playing the keyboard. Horrible production values. Lighting looks like our basement. But isn’t it nice to see what art emerges when you get beyond high-gloss?

We beat up on Joseph Jaffe a few posts ago about his advocacy of paid opinions. To show we’re fair-minded, we say watch his clever review above of Charmin’s bathroom marketing. We dig the iPhone app telling you where to find the nearest rest stop. Also, we’ve decided to start speaking in a Britash acksahnt. 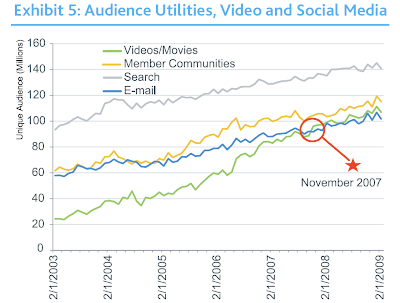 London’s Dirk Singer digests the latest Nielsen internet report so you don’t have to. A few of his highlights: More people use online video today than email, but watch for only 6 to 10 minutes a day, so TV is still video king. Time spent using social media bypassed email in February of this year, so it’s time your boss stopped snickering about Twitter. And mobile internet remains Peanuts’ Great Pumpkin, the exciting dream that Linus stayed up late to greet but has not yet quite arrived. 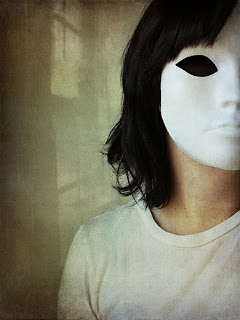 Yesterday we dropped into a debate with Chris Brogan about the ethics of paid blog posts. Chris is on the advisory board of IZEA, a company that enlists bloggers to write about brands in exchange for payment. Some feel this is OK. Others, like us, think buying online opinions is an ethically challenged gray area of marketing communications.

The real problem, of course, is deception — we can argue as to what degree, but there is no question that paid posts deceive by elevating a topic artificially and by inserting opinions more favorable because they have been bought. (This is one reason why Google seeks to ban paid posts from search results.) Even with disclosure saying a blog post is “a sponsored conversation,” the conflicts of interest and levels of confusion are high.

Does Joseph Jaffe really like his Panasonic TV enough to write about it?

Or is Joseph tweeting because Panasonic is his client, for whom he organizes blogger junkets to build online reviews of Panasonic gadgets? And does Keith Burtis realize, in the exchange above, that he just stumbled into a paid conversation?

Degrees of deception are nothing new. Back in 1996 Bella DePaulo, Ph.D., a psychologist at the University of Virginia, asked 147 people to keep a journal of all the lies they told in one week — with surprising results. Lies are extremely common in human communications; in any seven days, we tend to deceive about one-third of the people we talk to one on one. Men and women lie differently (men tend to be more egotistical, lying to inflate their personas, while women are more likely to deceive to appease hurt feelings). The wildest finding was that the intent of most lies was to be helpful. We use falsehoods to make others feel better. We even may need lies to boost our own self-esteem.

So what’s wrong with a good lie?

All communication contains a spectrum of truth vs. fiction, but the closer we get to untruths the more cognitive dissonance we encounter. Since humans need to sort their way through life by making judgments based on outside information, we often rely on others to tell us what is going on in the world. Dishonesty can make us feel better; it can also be dangerous by skewing the facts in ways that lead to wrong assumptions. We may have an evolutionary bias toward the truth; cave men who lied about sabre-toothed tigers may have gotten their friends eaten, and only the skeptical survived to pass down genes.

Advertising, of course, is often filled with stretched truths; this may be why media have demanded for a century that advertising be clearly labeled, so that consumers can judge the communication with a grain of salt.

Lies and half-truths surround us. This probably explains why people fight so much over politics, since there may be no right answer. It also hints at why paid posts are so controversial. In a world of imperfect information, it strains our mental data intake to learn that supposedly authentic opinions online may, or may not, be skewed by cash changing hands. 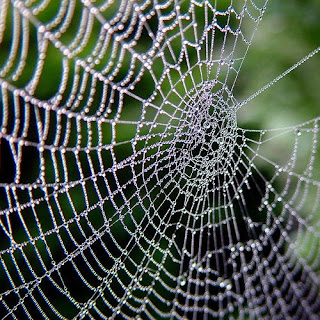 One of the coolest behavioral targeting trends we see is from emerging companies such as Rapleaf that map the connections or relationships between consumers. This is revolutionary ground, because companies can now predict what you might do based on what your closest human friends are doing.

Consider that a recent study by AT&T found that “network neighbors,” or people who communicate often with each other, are 5 times more likely to respond to the same marketing offer, and you see why marketers are intrigued.

Here’s one example of how Rapleaf enables this. Imagine you run an airline company and map data to realize that customer John Smith flies twice a year from New York City to Las Vegas. Now imagine you append information from Rapleaf, compiled from millions of online social interactions, and find out that John Smith has two college friends who live in Las Vegas. Putting two and two together, you could then send direct mail offers to John’s friends in Vegas offering them discount airfares to visit New York City — so they can fly to see their friend in reverse.

What’s interesting about this?

1. It shows the power of social media in mapping real human connections that can make offers more compelling to consumers.

2. It shows that social media is a data collection source — but the marketing implementation could be somewhere entirely else. If you can learn something about consumers by watching their behavior on Facebook or Twitter, the best sales approach may be with traditional offline marketing media.

3. It shows that people are watching you. Privacy guidelines aside, now with so much exposed online, for the first time the personal relationships and individual quirks are going into master prospect databases. 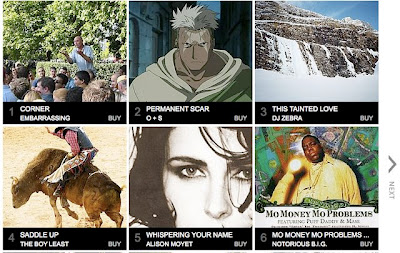 If you read The Wisdom of Crowds, at least the first 10 pages, you get that groups of people tend to be really smart in picking correct answers. So why not use the millions on social media to find the best music for your iPod playlists?

We Are Hunted is a perfect search engine for music, compiling the top 99 most-wanted tunes from internet peer-to-peer networks, Twitter, MySpace, and other online networks where people with better haircuts than us hang out. Wired has a complete writeup.